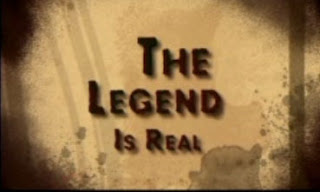 Squatchploitation runs rampant in popular culture. You've really got to feel for the Big Hairy Guy... or at least hope he gets REVENGE.

This blog entry is rated "R," for ridiculous. It should not be viewed by anyone with the mental age of one 17-and-under; though frankly, this might help in appreciating these films. We do recommend viewing these, even though we are now going to tear them to little, bloody pieces. Why not? It's all good fun.

Clawed: The Legend of Sasquatch (2005), a.k.a. The Unknown, directed by Karl Kozak (also known for Skid Marks), is a not quite wretched production with the thoroughly overdone horror movie themes of teenagers going off into the forest, titties and beer, the nerd getting the girl and saving the day along with a wise Native American ("Takka Hey has returned"), going up against corrupt law-enforcement, ignorant adults and of course... redneck poachers. Suffice it to say, it is a classic dud, but with a realistic enough Bigfoot that partially redeems it.

This one has a real athlete in the suit which is realistically custom--made, not just some bad gorilla costume. And as he runs it is a fairly convincing, unique and rare depiction of what a real running Sasquatch might look like. However, the themes are tired, and no amount of boobies in a tent or horrific brainings and decapitations can make up for that. 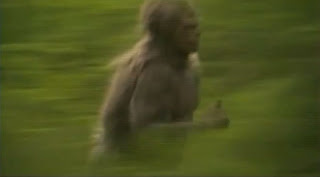 Here the Bigfoot works for justice and the defense of the land, which are also overused themes, but at least they are worthy ones. Plot summary: a bunch of hicks get slaughtered while out illegally hunting, everyone thinks it is a bear, but it is really a Bigfoot defending the sacred mountain that the Indians respected, that the white man does not; the town's commercial interests want to cover it up to protect tourist business; then four teens go out on an extra-credit investigation and nearly get slaughtered, too, even though they are supposedly the good guys, a wily "Noble Savage" forest ranger knows the real game and defeats the white trash.

See the TRAILER for the film... HERE, on IMDb.

Not bad enough? Try this next one, then... it will live down to your expectations.

Suburban Sasquatch (2004), directed by Dave Wascavage (also maker of Zombies by Design), at least has the value of humor and really outright awfulness running as its virtues. But there is a certain let-down here. Compare the ghastly cover image with the actual Bigfoot, and you'll see what I mean. 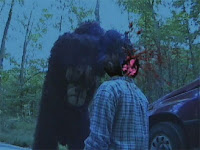 One expects something new and terrible here, and what one gets is just another... yes, gorilla suit. But still, this one grew on me, strangely, as its hackneyed plot progressed. It is so awfully, horribly, extremely, bitterly, nastily bad that it partially redeems itself. And there is a story here. Again, it involves Native Americans and the horrors of suburban housing development, with a nerdy journalist/writer trying to find himself and getting the girl in the end. 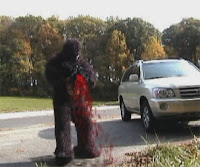 Someone didn't really think this one through very clearly, though, as there are logical and moral inconsistencies. Bigfoot arrives and starts ripping peoples' limbs off and eating them. He is damned hungry, too. And this is to stop a new, cheap upper-middle class tract home lot being put in to some Pennsylvania forest land on the edge of town.

A Native gal of ravishing, leggy sexiness is assigned by an Elder to assume the role of sacred tribal Sasquatch Fighter. So, even though BF is out to save the Land, she has to try to kill him. Contradictory, yes, but it does lead to some really wretched but hilarious gore and blood and pet dog ripping (see image) scenes, all done in a most primitive superimposition animation technique where awful Atari-1980s level computer graphics of brain bashings and blood splatters are added on top of the low-grade video tape movie images. 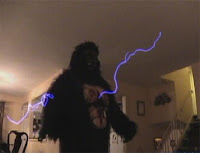 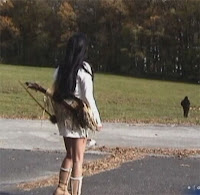 There is a great scene where a bourgeois real estate lady slowly chewing a hot dog is flashed back and forth in juxtaposition with the Bigfoot gorily and bloodily gnawing on the pieces of a dismembered human victim. Yes, this movie does, again, involve the abduction of human women by Bigfoot, for sinister purposes. And then, in the ultimate cop-out, this Sasquatch turns out to be a spirit being shapeshifter, appearing on Earth as a warning when humanity has done wrong. He is finally defeated with magic glowing crystal arrows and dispelled in a zapping poof of purple electricity. I'm not sure what the lesson was here, though I know it wasn't one in film-making. It is so bad, I liked it enough to finish it with a chuckle.

See the TRAILER for the film... HERE, on YouTube; more INFO can be found... HERE on IMDb.

Now, we can take bad, bad, bad, awful film-making, so long as it has humor and certain classic themes used in novel and ironic ways, such as found in APE CANYON. 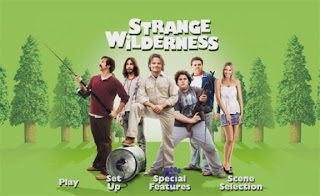 But what we can't stand is a higher budget film that insults one's intelligence. This next film, STRANGE WILDERNESS (2008), does just that, finding a new low in common denominator. It was made by erstwhile Saturday Night Live writer, Fred Wolf, and stars some really bad, unmentionable pot smoking, nitrous-whiffing dude-type, Dumb-and-Dumber style actors, with the obligatory hot babe tag-along.

It does have some slightly funny moments that stimulate groan-laughs that often feel like gurgling indigestion, and yes, again, some titties and beer; but it is just plain dumb, and not dumb in a very good way.

Inheriting the titular wildlife show from his famous father, the stoner son takes his crew on a voyage in an RV to, of all places, Ecuador, in order to film Bigfoot and save the show from cancellation.

They get a secret map to Bigfoot's cave and trek on in, through many predictable and ridiculous mishaps. Bigfoot has one speaking line: he grogily shuffles out of his cave having just woken up, says "Huh?", and then is riddled with bullets from several different varieties of automatic rifles manned by the freaked out documentarians.

See the TRAILER for the film... HERE, and more INFO can be found... HERE on IMDb.

Image: this film's idea of anthropological documentation of "natives." Anything for ratings, and web hits, I suppose. Is this enough reason for you to watch "Strange Wilderness"? I hope you ain't that desperate, dude!

So there. I wasted my time. You should too--waste yours that is--if you are a Bigfoot Completist like me, or if you just LIKE bad pop (poop?) culture. All of these videos can be rented on Netflix (as can the one following). None of them are worth buying, believe me, unless you are a true fanatic collector.

Here's another one, just so we have some REAL Sasquatch content... 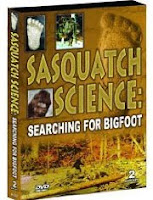 SASQUATCH SCIENCE,  produced by UFO TV, is a two-disc set that could easily have been fit, timewise, on only one disc. Hence, you must pay thirty rip-off bucks to buy it. However, it may be rented for next to nothing. I'd recommend actually going to a real Bigfoot conference somewhere and seeing the guys on this one, as there at least you will also get to eat some good food, meet cool squatching people, and buy some Bigfoot swag. Here one gets four good presenters, presented horribly. They did not even get one of the speaker's name correctly, calling him "Dr. D. Jeffrey" on the intro. splash screen. Really, the presenters are very good ones you may have seen before, doing their standard lectures: Dr. Jeff Meldrum, Dr. John Bindernagel, Gordon Strasenburgh, and then the Moses of Squatching, John Green. The video of these guys is not professionally done, but is adequate; however, the recording of the presentations is not complete in all cases, with poor edits probably done when the guy knocked over his camera while blowing his nose. Coughs and clattering plates and conversation in the audience often obscure the speakers--this is no soundboard recording. The producers do not even contextualize these with an introduction, not telling us where the conference was held or when, and offering no bonus extras. But then, hey, if you didn't catch these guys in 2003 or so, then by all means check it out. 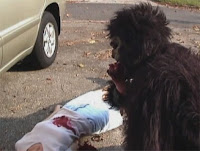 OK, we admit it. This blog entry is nothing but filler we're putting up here to stall while we finish our lengthy, sophisticated, intellectually refined, earth-shattering, revelatory, visionary interview with DANIEL PEREZ of The Bigfoot Times (view an online sample issue through this here... LINK). That one should be finished for next week's post, unless Daniel gets too big a contract for electrician work.

Yum Yum! Hu-man limbs. Me not angry really this week. My belly FULL! Taste just like chicken. You watch out in Bluff Creek my turf. This film remind me of "Bigfoot Massacre," me eating M.K. Davis brain. Mmm. Yum Yum!!! Good, make me fur all shine and glossy, like avocado.

Copyright 2009, Steven Streufert, but who cares, anyway??? This stuff may be quoted and by all rights you should at least give us a citation and a link to this blog. Images are used for promotional purposes only, and the producers should THANK US. The proprietor of Bigfoot Books bookshop, Steve sometimes does other things besides Bigfoot/Sasquatch... MySpace, Facebook, Email.

Posted by Steven Streufert at 3:08 PM No comments: Links to this post