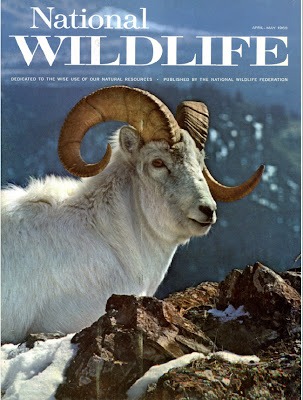 This issue of your friendly, neighborhood Bigfoot blog contains a somewhat size-reduced copy (For Research Purposes Only) of the very scarce and of course out-of-print NATIONAL WILDLIFE article published in the April-May 1968 issue of this magazine of the National Wildlife Federation (still in existence, so click the name-link to check them out). This was  published just months after the filming of the PATTERSON-GIMLIN FILM of a female Bigfoot creature walking along a sandbar on Bluff Creek, Del Norte County, California on October 20th, 1967.

This issue is coming up to the 43rd anniversary of its publication, much like the ARGOSY MAGAZINE article which we published a copy of in our last blog entry. It was the second major publication of the images and information from that famous day in Bigfooting. According to the History Channel show, MonsterQuest ("Bigfoot: Critical Evidence" episode), Roger Patterson was asked to take a lie detector test before they would risk publishing this article. Patterson PASSED this test with no doubt in the examiner's mind.

Read on for more. Below you'll find the results of a game camera we (researher Rip Lyttle and I) put up in the forest behind our cabin, plus how we were made into a cartoon character, and a recent lecture given by one of our favorite Bigfooters, Thom Powell.
*******
Here is the NATIONAL WILDLIFE article from APRIL-MAY 1968, along with the cover (above) and contents page. CLICK IMAGES TO ENLARGE AND READ, or else right-click to download and open and enlarge in your own photo-processing program. We have a high-quality massive megabyte PDF file of this, but these are the best we can present here within the limits of Blogspot/Blogger. 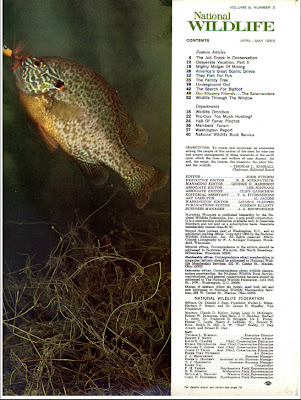 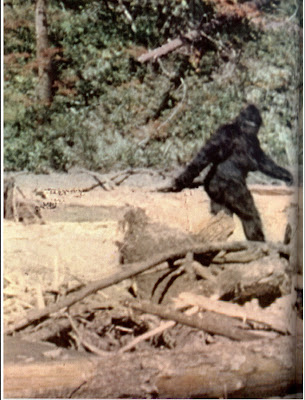 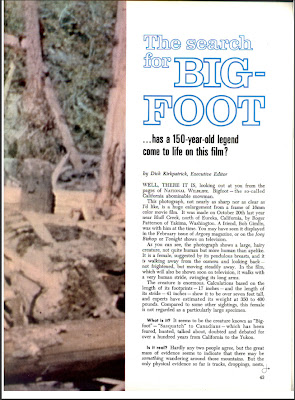 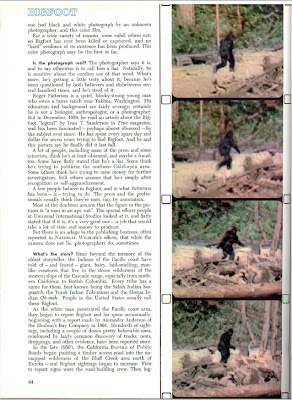 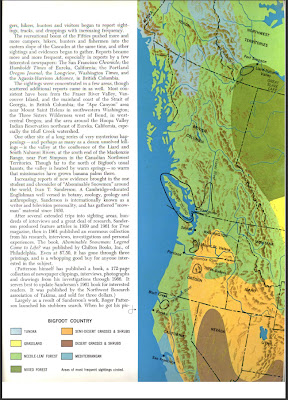 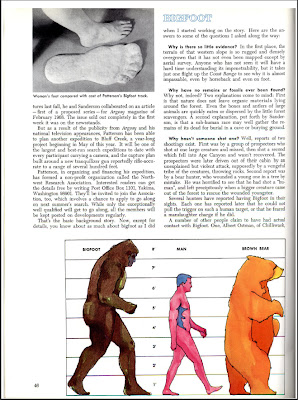 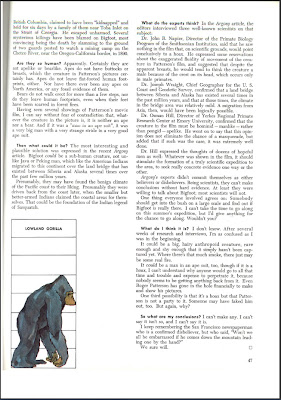 *******
FEISTY CATS, GAME CAMERA CATS
Recently Rip Lyttle and I decided to put up a game camera in the backyard of my cabin in an active game trail area showing recent and very definite bear signs. As there has been some odd wood knocking back there in the night recently, as well as some much more definite heavy footfalls on the hillside a couple of years ago, we thought maybe (just maybe) we might also get... something more in the photos. Of course, we know BF is smarter than that! Anyway, other than some nifty deer photos in the second week's posting, our first endeavors got only this very mysterious creature coming right up to the camera for a look. What was it?
To the best of our ability to determine we have concluded that it is one of the feral kittens that were born on the porch of my cabin in a drawer that the semi-feral mother seemed to like. Good news! I've already re-domesticated one of these little guys, so I'm hoping we can find more of them still alive (despite the foxes). Sorry, no Bigfoot; but heck, it is winter. The strange thing is that the wood knocking most recently heard came from an area seemingly intentionally away from the game camera placement. Was a Bigfoot out in the hills chuckling at us? Who knows.
*******
A person whom I met recently apparently found me to be some kind of a character; or, at least, the Bigfoot interest intrigued her. As her graphic novel series, FEISTY CATS, is produced out of Humboldt County, I'd suggested that perhaps she should include HumCo's own, Bigfoot, in her books. Well, little did I know that I'd get a supporting role alongside of Justin Bieber, of all people. Thankfully, I don't really know much about this Justin guy (don't tell me!), but it was nice in any case to see BF get some cred. Those of you who know me will probably die laughing at this characterization. FEISTY CATS is branching out into animation, and a brief introductory clip to an intended full-length South Park-style movie has been produced. You can view the video on their site HERE. FEISTY CATS is the brainchild of Natasha Breen, of Hydesville, with help from her brother, David. You can read sample books and find other neat stuff at the feistycats.com web site. You can also watch the seven-minute video right here:
******* 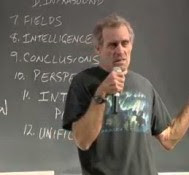