Yes, I've been neglecting this blog. Things have been rather distracting, and I'm frankly a little tired of the Bigfooting scene in all of its petty dysfunction. 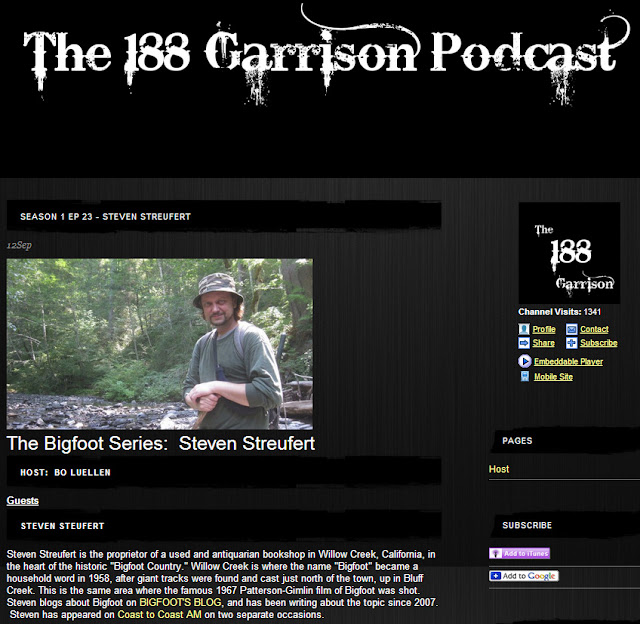 Anyway, I promise, there are some cool things in the hopper. For now, enjoy an online radio show I did recently. Be sure to check out the rest of this cool podcast, 188 GARRISON, which has recently featured a number of Bigfoot guests besides myself, such as Cliff Barackman, Jeff Hilling and the Bigfoot Chicks.
HOST: BO LUELLEN.

"Steven Streufert is the proprietor of a used and antiquarian bookshop in Willow Creek, California, in the heart of the historic "Bigfoot Country." Willow Creek is where the name "Bigfoot" became a household word in 1958, after giant tracks were found and cast just north of the town, up in Bluff Creek. This is the same area where the famous 1967 Patterson-Gimlin film of Bigfoot was shot. Steven blogs about Bigfoot on BIGFOOT'S BLOG, and has been writing about the topic since 2007. Steven has appeared on Coast to Coast AM on two separate occasions."
Also featured on the show are Oklahoma researcher Chad Scott and comedian and Bigfoot believer, Bronson Vaughn.

You can see that Bo is expanding the nature of his podcast, as it is heading in a decidedly different direction from its origins as a comedy and local music show. Here is its description on Facebook: 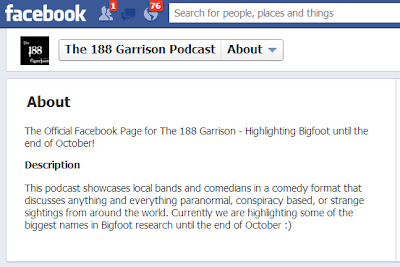 BTW, that image of myself above was shot by Robert Leiterman this year, 2012, in upper Bluff Creek, just downstream from the now fully-proven and surveyed Patterson-Gimlin Film Site.

Posted by Steven Streufert at 12:53 AM