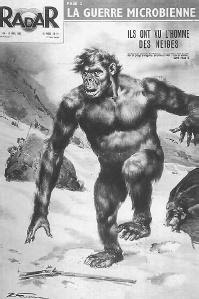 These Bigfoot-related anecdotes were reported at Bigfoot Books in Willow Creek by long-time resident of the area (now of Salyer), Dave Short. Dave is a sane and reliable guy whose career was spent in public service on the Fire Department and driving ambulances. Here are more or less verbatim/unedited report notes, taken by me, Steve Streufert. Most of this is paraphrased shorthand of Dave's statements.

DAVE SHORT: An old Indian woman from the Pecwan (most likely Yurok) once told this story. Dave was taking her to town in the ambulance, asked if she'd ever seen bigfoot. Bigfoot? Yeah, Ohmah, Sasquatch. Oh, you mean Wildman! "He sings." What does he sing." My lady, my lady I'm coming for you, I'm coming for you." And then what? "And then," she says with a straight face, "he eats you!!!" 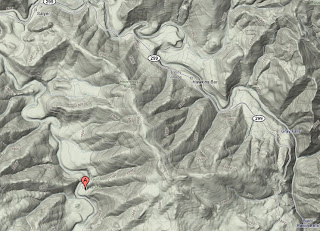 Another friend of Dave's, Kenny (no last name given), saw a larger one and a smaller one together. On the back road between South Fork Road and Burnt Ranch. Hunting, way up on some ridge on a four-wheeler ATV, glassing with a scope for deer. In the fall, during deer season. Looking down a few hundred yards into a clearing, cut-block clear cut. Saw BF walk through, on hind legs, straight up, hairy, large. A smaller one came in right behind it, walking one after the other. Saw it all the way across the clearing. Then he hightailed it out of there, inexplicably scared. Year very apprx. only, between 1970s and 90s. Up at 3000 feet or more.
Edward Patrick, called "Ed" or "Patrick"--logging equipment was attacked up around Bluff Creek area, before 1970s. A certain man, up from LA, had some money to apply to Bigfoot hunting, was hiring local guys with jeeps to chain up the tires, driving as far as they could get up into the snow, then look for BF sign. Hair, scat, prints. "How many tracks/prints have you seen." The reply, "Well, ah, maybe 500." They were in fresh snow, no other tracks around, early in the morning, on roads where nobody else had been as seen by the undisturbed fresh snow fall. No one lived up there and no one could get up there. Up steep hills where humans could not have walked, long stride, esp. in snow. Never actually saw one.
These tendencies give rise to... Dave's summary assessment: they don't really trust people, could probably eat just about anything, don't need fire, don't need clothes, hence don't need people; hence it is understandable they are not seen. Just stay to themselves, if they see people they just stay put and watch. If they are omnivorous they could live and survive around here quite easily.
Dave has lived around here since 1978. He worked (until 1995) with local EMT Ambulance service; Fire Dept. volunteer, too, since he was a kid. He is not personally an outdoorsman, but he's heard from a lot who have seen them, LOTS of old Indians. He lived on the Hoopa Reservation, ran the ambulance there for 15 years. Most friends of his were on the older/elder side out there, with interesting stories to tell.
I asked Dave further about the other cryptid/mystery creatures spoken of around the Willow Creek and Hoopa area....

The Hupa people are "superstitious" about "INJUN DEVILS" and LITTLE PEOPLE. Don't really like to talk about them. East Fork Bridge near the campground, had its own Indian Devil... a family member had an encounter with one, caused his car to crash (like a Gremlin? Troll? or Ghost?) Not necessarily good luck, maybe bad. Hence the fear. None seemed to have actually seen one. More a "felt" thing. Are "Indian Devils" human, or are they Bigfoot-related? Anthropological sources relate the "Devils" to sorcery.
[Editorial note: another source, Bobo, says that the Yurok-Hupa Injun Devils were a tribal shamanic role practiced by some local natives (like the old Bear Shamans?). I have had local Natives confirm this. Lucy Thompson's TO THE AMERICAN INDIAN book says clearly that they were human, not bigfoots, and carried certain things like sticks and medicine bags, unlike sasquatches. Many BF researchers take any Native statement about "wild folk" or "devils" to be indicative of the sasquatch, but that is not necessarily so. There is no reason a human could not choose to leave the main tribe and live in a less socialized or wild state.]
SUGAR BOWL, out near Hoopa, the sacred Rain Rock is down there, a nature-calendar. LITTLE PEOPLE? Other reports have stated that there was no Native settlement made permanently down there, despite ideal natural conditions, due to the presence of the Little People. [It was THEIR turf, much like the upper headwaters of Bluff Creek were avoided as the home of the Mountain People or Ape-men.] What are these "Little People"? Some accounts depict them as furry little bigfoots, while others claim they are more like elves, pixies or brownies. We will be investigating this issue, but information is hard to come by, with sources reluctant to speak. Also... Willie Burgers ("boogers")? KAMOSS? Snake-like creature once reported: wider than the road! Also seen in the rivers, sometimes serpentine, other times more like a Loch Ness Monster. 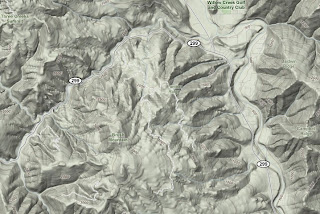 And more news:
RECENT SIGHTING! Another one, the fifth report from that area we've heard in the last couple of years, was seen up on FRIDAY RIDGE ROAD. Local BFRO affiliate James Bobo Fay responded and investigated, driving the road, but no evidence was found. This road runs right back of Bigfoot Books' location, with its terminus at Brush Mountain Lookout (see image, below) being just a mile or so as the bird flies from the cabin of yours truly. See my own report in the begining of the article BIGFOOT IN HUMBOLDT COUNTY, linked to the right of this blog. 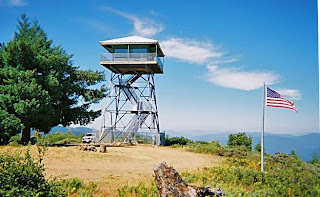 ANOTHER REPORT: An customer in the shop, Billy (no last name given), told of being followed by a Bigfoot out near Maple Creek, in the hills past Blue Lake and Korbel. His kids were with him, and they all saw it. At first they thought it was a bear, but then noticed it standing in the shadows, with a clear arm raised up against a tree. It was very tall. It never stepped out into a clearing so that they could see it distinctly from its camouflaged background. They decided to retreat, but periodically heard it behind them, moving stealthfully in the brush and staying behind or beside trees. Looking back, they saw it a few more times. Getting to the cabin it was seen again by the man's girlfriend. They decided to stay put in the cabin rather than pursue it. 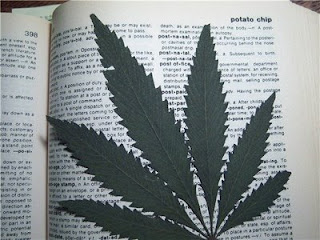 AND IN ANOTHER AREA:
Bigfoot Books was blogged again, this time by a customer. She enjoyed getting her "Humboldt County Bookmark," found pressed between the pages of a dictionary, at no extra cost.
Image pilfered from Kristabel's blog, since she pilfered one from mine, that I pilfered (with permission) from Tom Yamarone's blog. Ah, the wonders of blogging!
Check out the CHOCOLATE COVERED XANAX blog article here: http://chocolatecoveredxanax.blogspot.com/2009/06/humboldt-county-bookmark.html
with an UPDATE here:
http://chocolatecoveredxanax.blogspot.com/2009/07/blog-crush-562.html
Back to work on deciphering the P-G FILM TIMELINE! Report coming sooner or later. Also, DUANE FLATMO is going to respond to our questions re. bigfoot and his ACE HARDWARE BIGFOOT MURAL. He has nearly finished the final touch-up and detail work. We'll have a full pictorial expose soon.
Posted by Steven Streufert at 4:24 PM