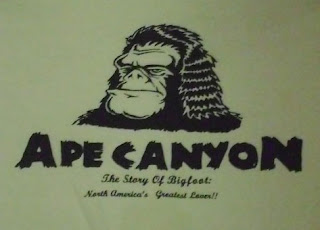 Some months ago Humboldt County filmmaker Jon Olsen visited Bigfoot Books. He is the maker of the fabulously silly b-movie, APE CANYON, about love, sex and death in the Wild. The film is highly amusing; but serious researchers of Bigfoot might want to take my brief review of his film, below, with a grain of salt lick.
APE CANYON
Price: $16.99; on Amazon: http://www.amazon.com/APE-CANYON/dp/B0007CQ528/ref=cm_cr-mr-title

This is a work of pure comic genius. It is backed by extensive research into the more extreme aspects of the Sasquatch in popular culture, substantiated by Native American lore centuries old. Yes, there is a history of inter-species hominid communality. The soundtrack music constitutes a masterfully applied parody, moving from love-comedy, through pornography, to tragedy. Though made on an obviously low budget, that is part of the point--this film is a satire of human romantic motivation as much as it is of the b-movie bigfoot monster genre. If you meet the filmmaker he will probably give you a promotional t-shirt, which is even cooler than the film. Its climactic ending made me weep. 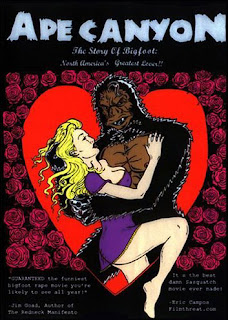 UPDATE!!! (Feb. 24, 2010)
There's more to Humboldt County than Bigfoot and marijuana. In ZOMBIES OF EUREKA Jon Olsen searches for another cryptid "life" form. View this suite of zombie-themed music videos he did for local area alternative bands here:
http://www.imdb.com/video/wab/vi1527776025/

Posted by Steven Streufert at 12:56 PM