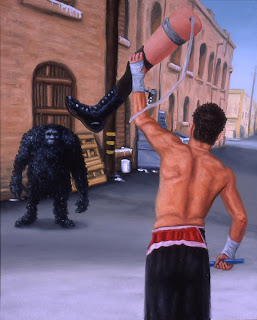 No other artist reveals the strangeness of Eureka and Humboldt County at large better than Jesse Wiedel. His art contains strange juxtapositions of the weirdly normal, commonplace banality and festering decay surrounding bizarre characters in epic battles and confrontations with the demonic forces within themselves, the cultural and economic constraints that contain them, the horrid aberrations of degeneracy and failure. A parking lot beside a liquor store becomes the stage of warring titans missing teeth, tweaked to the extreme, wife-beater shirt-wearing degenerates, striving for perverse ends, reaching for mutant transcendence.
This would not be Humboldt if Bigfoot did not enter the picture; and so he does, here confronting a wrestler or boxer bearing a false leg in triumphant defiance. A sinister mystery lurks behind every pretty Old Town Victorian storefront. These alleys were places where the whores sang from windows above, and junkies still lurk among the ghosts of murder victims and the expelled Chinese, the dark side of the gold and lumber booms. 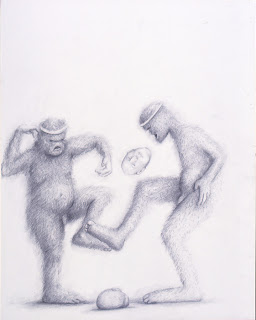 In those thick, dark forests that humans have tried so adamantly to destroy, a living mystery still walks: the real spirit of the living Northwest. Bigfoot appears again as hippie hackeysackers, mocking the feel-good contemporary culture of the potheads. Wiedel's characters are more hardcore. His environments themselves play a character role, embodying in their tacky and rotting bad taste an externalization of the human spirit that has created such a place. A painting done of the Bigfoot Burger joint in Willow Creek, seen from the parking lot of Bigfoot Books, shows a malignant black blob that could be a tarp covering a corpse, or a projection of the terror that lurks at the heart and history of ordinary places. 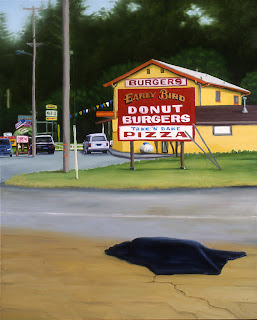 The absurdity of popular culture and tabloid myth are displayed in a taxidermy display including a bigfoot creature lifted right off the cover of the Weekly World News.

Mr. Wiedel contacted Bigfoot Books searching for a signed bigfoot book he had loved as a child, but then had inexplicably buried as treasure in the woods. Going back later he was unable to find it. Though the book was lost, this great art was found. Perhaps he will design the new BIGFOOT BOOKS corporate logo and bookmark? 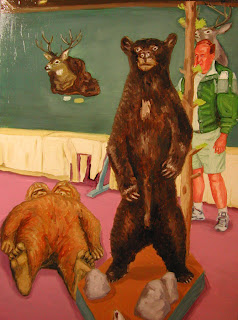 We conducted a brief email interview with the Artist, as we could not fully recall our in-person interview in a Eureka bar from the previous night.

BF BLOG: In the context or your larger themes and the content/characters of your art, how does BIGFOOT fit in? And what does BF symbolize in the context you have used him: standing threateningly in an alleyway, fighting, two-headed and lying stuffed on the floor, or as a hippified statue? Etc.

WIEDEL: In the paintings, bigfoot represents something that metaphorically mimics the sometimes eerie landscape of Eureka. Bigfoot has only been seen in fleeting ways, like a carload of mimes. You see strange things in Eureka. I like to paint things that are strange, but could very well be for real. It's more interesting to me than purely fantastical art.

BF BLOG: What is your own personal view on the creature and what it represents? How does bigfoot relate to the human elements in your art?

WIEDEL: I think bigfoot is the representative for the wilderness. Since this town is butted right up against the wilderness, it only makes sense that bigfoot should make an appearance in the paintings now and then, as a representative. It's more fun to paint bigfoot than a bunch of trees. 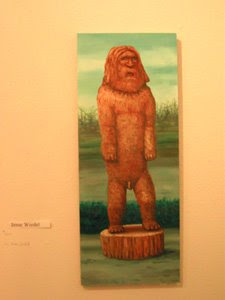 Wiedel's Artistic Statement: "In my narrative streetscapes, I take a variety of visual references and create a pastiche of fictionalized tableaus that are sad, coarse and degenerate. This invented world dramatizes the spectacle of street culture, where people aimlessly wander and interact in a state of somnambulistic rebellion. The weary structures and street signs that backdrop these individuals metaphorically mimic their isolation and subtle desperation. These sordid tales of public humiliation serve as an allegory for the ever-expanding malaise of the working class, in the grand narrative tradition of Hogarth, Goya, and Dix." 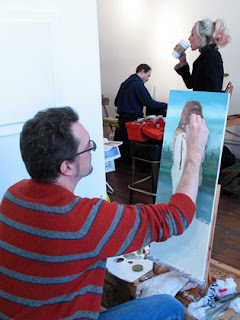 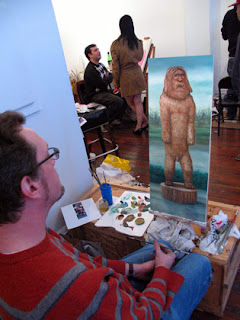 All images in this blog entry COPYRIGHT by Jesse Wiedel, used with permission, 2009.

Posted by Steven Streufert at 4:24 PM