Denali, a real trooper, did what many a grown-up would not do. She slogged her way down the last mile or so on the now-closed 12N13H on foot, reaching the bottom of the canyon where Bluff Creek flows. Proceeding through thick forest, over downed trees, through thick brush and nettles, into and out of mud bogs, we came to the area where it is generally accepted that Bigfoot was filmed 44 years ago today by Roger Patterson and Bob Gimlin.

Not only is she perhaps the youngest Bigfooter on record to reach the film site area, we now have reason to believe that it is the CORRECT site, and not just someone's wild and unfounded theory. Based upon our studies of four years now, as well as on recent developments in the research of Bill Munns, and Bob Gimlin's reconfirmation of the location of the first sighting of the creature, we have now come to the point where we feel pretty darn confident that we can prove the location on-site. We have the big trees. We have the old stumps seen in the film still there in the ground. We have the correct layout of the creek. We have, therefore, only one area that we can lay out the track-way of the film's subject in that fairly narrow creekside sandbar. All we have to do now is measure it out... and we'll be doing that tomorrow. For now, see below for some film site diagrams, as well as Denali's film site quest, wherein she saw what adult eyes have lost track of and not been able to pinpoint for over two decades. 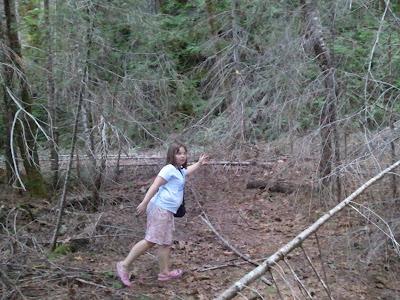 IN THE FOOTSTEPS OF BIGFOOT 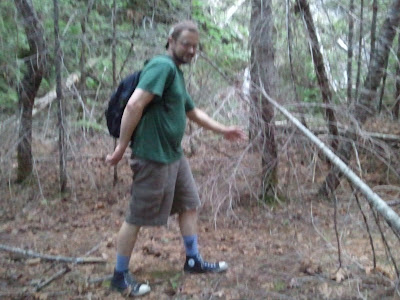 *******
ADDENDA and ANCILLA
So folks, stay tuned here for new developments from our last trip this year to Bluff Creek. Watch for a new series of Bluff Creek Film Site Project videos on YouTube coming your way soon. Also, tune in to FINDING BIGFOOT on Animal Planet, October 30th. It is their special two-hour "Birth of a Legend" episode, filmed here in the Willow Creek area. I'm told that Yours Truly appears in the final edit. Hopefully they didn't edit it to make me look like a goofball... or maybe I just am a goof? Well, tune in for that. See ya.

What me have to angry be about? It my birthday. Me drink a beer and eat pizza I find in hu-man trash bin. It taste better than eating hu-mans, which me do if me get angry. So me won't.