Not to toot our own horn too much, but BIGFOOT BOOKS appeared recently on one of the largest cryptozoological web sites on the planet, CRYPTOMUNDO (http://www.cryptomundo.com/). But hey, it is for a good cause! Perhaps someone out there in the Bigfooting world would like to consider a real estate investment that could also preserve an important piece of Bigfoot history? Check it out here: http://www.cryptomundo.com/cryptozoo-news/save-bf/. Cryptomundo covers all things cryptid. If you want to know more about whatever strange creature may have appeared in your backyard, they probably have a section on it. It worked for me recently when I needed to know more about a Giant Salamander report.

Loren Coleman (http://en.wikipedia.org/wiki/Loren_Colemana.org/wiki/Loren_Coleman), who runs Cryptomundo, is the author or editor of some thirty books, including many dealing with Bigfoot, most notably the fine reference books, "The Field Guide to Bigfoot and Other Mystery Primates" and "Cryptozoology A to Z," He wrote, as well, a biography of early bigfooter/Abominable Snowman hunter, Tom Slick, who financed the classic Pacific Northwest Expedition in Bluff Creek area in 1959-1962. Coleman's theories are mentioned in the article,"Sex and the Single Sasquatch," as well: http://www.ncbuy.com/news/2003-03-07/1006308.html. He appears frequently in television documentaries on Bigfoot and other topics. Active in the field since the 1960s, he resides in Maine. 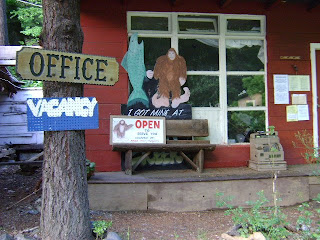 The Bluff Creek Company store, where Patterson and Gimlin provisioned up for the 1967 expedition that gave us their famous bigfoot film, may be demolished soon--unless SOMEONE acts. Recently I spoke with the current owner, since 1964, of the business so linked with the mystery of Bluff Creek. He remembered Roger Patterson, but not Bob Gimlin. He also told me of the many Bigfoot incidents that had occurred at the store site, including a nearby "stench worse than a slop truck on a 100 degree day." Here follows the paraphrase of what I said on the issue, done by Loren Coleman:
"Writing recently, Streufert noted that a location that might be in most immediate danger is the 'Bluff Creek Company store, where [Roger] Patterson and [Bob] Gimlin bought supplies in 1967. According to owner, Phil Smith Sr., the old store building and adjacent Bluff Creek Resort with mountain and river acres are going up for sale. Someone in the Bigfoot community should buy this place before the decrepit yet historical Bluff Creek Company Store is demolished! He warns the building is slated for destruction soon. Back behind the store Mr. Smith showed this writer the slab where The Greasy Spoon Restaurant once stood.... I spoke with the owner, Phil Smith, Sr., on my way up to the Yakima Round-Up. He told me then that the building was not usable, and that it would have to be torn down eventually. He’s planning to sell the place, and to put it up on the market soon. I think he’d thought that it would be a selling point to the property if he ‘cleaned it up’ a bit. I tried to convince him of the value of the building, its historical significance (which he agreed with), and that the building would be an asset for that reason. I told him I’d spread the word around the Bigfooting community.'" 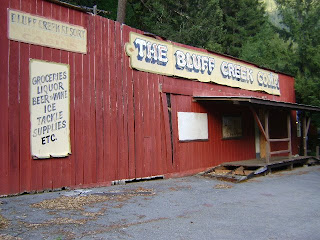 “'The asking price would be around $300,000 he tells me, including the going concern of trailer park/campground, riverfront access, and something like 19 acres of nice mountain land. It would make a great Bigfoot museum or expeditionary supply store, I think. It SHOULD be preserved by someone in our field. We can still save it. Phil is getting pretty up in years, and (apparently) tired of the upkeep.... The last time I was up in Bluff Creek I noticed there were some bulldozers in the lot right next to the old Company Store building [it turns out these were from the work being done up on Fish Lake Road]. It put the fear into me that it might be torn down right then. BUT no! I called the Orleans Community Services District today, and spoke with Shirley Reynolds, who runs the office there. She says the thing is still standing, and that she hasn’t heard of any plans to destroy it yet…. Orleans, she says, is the HEART of the Bigfoot Territory (and Willow Creek is only the ‘Gateway’ to Bigfoot Country).'” For more on this issue see our previous post: http://bigfootbooksblog.blogspot.com/2009/06/cryptid-salamander-yakima-writers-block.html 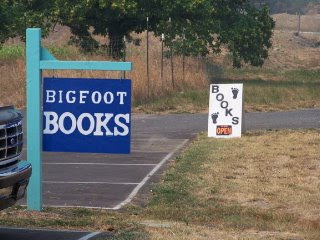 Loren also told me he likes to support bookstores, which we here at BIGFOOT BOOKS do greatly appreciate! All you bigfooters, come on in! We normally have 50-70 Bigfoot/Sasquatch book and video titles in stock, new and used.

IN OTHER NEWS, a visit from Bay Area bigfoot hunter, Jerry Hein. 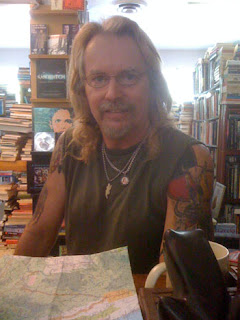 Mr. Hein, whom we had previously met at the Yakima Bigfoot Round-Up, was passing through Willow Creek while on a camping and bigfoot hunting trip in our area. He had photos of some footprints out of a total of nine he'd found in roadside dust 7.4 miles from the ranger office on Hwy. 88, on T-Bar Road, 28 miles south of Happy Camp, north of Somes Bar and Orleans, on July 13, 2009. See photos below. 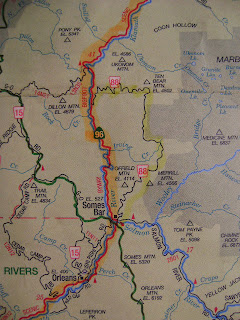 At left, Hein's travel map, with the route highlighted in yellow--right near Bluff Creek! 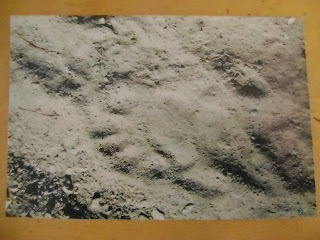 These do have a sasquatch-like shape to them, and were quite large, 14.5 feet by 6.5 inches; there was a distinct four-foot bipedal stride between the impressions. The detail is revealed better in a larger image, where one can more clearly see a heel impression. Upon further investigation some reddish-brown hair was found snagged about 10 feet up in a shrub. A sample was taken and will be tested. It does not look human, and seems too fine to be from a bear (and the height where the sample was found would mitigate it being from a bear). 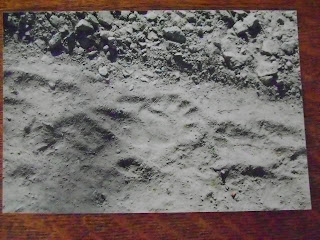 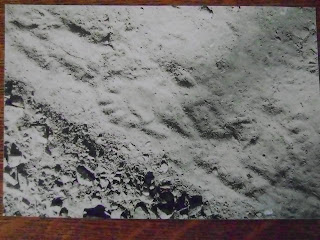 Jerry also told us of a strange experience he'd had the night before up at Tish-Tang camping area, along the Trinity River right at the south end of the Hoopa Reservation. This site is known for past sightings and footprint finds. He and a few other camp groups in other sites at the spot all heard a very intriguing noise that was not your average hooting owl or chuffing deer. The sound was like a high-pitched and then lower-pitched "shee-wah" or "shee-yuk," which sound would be repeated three times and then stop, and then start up again in a while from another spot. This went on for at least ten minutes. Finally, freaked out by this, two other camp site groups actually packed up their cars in the middle of the night and departed from the area! The remaining guy besides Hein, in a nearby campsite, stayed where he was, obviously way too drunk to drive or even to care. 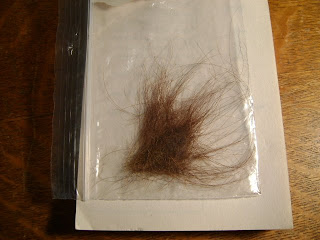 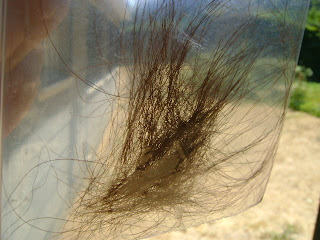 Hair samples found by Jerry Hein off Hwy. 88. They will be tested soon for their origin and possible DNA. Note the interesting cinnamon-brown color. 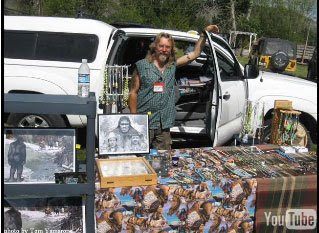 Image, Jerry Hein's amazing collection of Bigfoot merchandise and swag, at Yakima. Captured from Tom Yamarone's YouTube slideshow for "Jerry Crew, He Knew What to Do," viewable in the sidebar of this blog or at his blog site, http://www.bigfootsongs.com/. 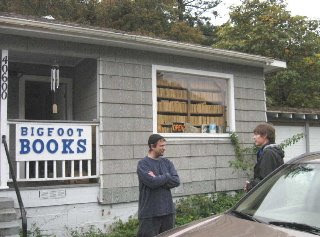 This photo, of Scott McClean and Steve at Bigfoot Books, was taken by Tom Yamarone courtesy of his blog.

In one more news flash: BIGFOOT AGAIN MAKES THE COVER OF THE EUREKA TIMES-STANDARD NEWSPAPER. It happened in 1958, again in 1967, and now in 2009. The paper ran a short article on its front page, above the fold, to honor the completion of the Bigfoot Mural done by Duane Flatmo. Check it here: http://www.times-standard.com/localnews/ci_12918007
Regarding Mr. Flatmo--he hasn't had time to respond to our own interview questions, but heck, we're just a blog, right? He swore he'd answer, and we'll post that blog entry when he does.

The massive theory of the "Leap of Skepticism" is still in progress, and may never be finished.
Posted by Steven Streufert at 11:58 AM

Email ThisBlogThis!Share to TwitterShare to FacebookShare to Pinterest
Labels: a Meeting with Jerry Hein with Vocalizations and Footprints, NEWS: Bigfoot Books on Cryptomundo, Save Bluff Creek Company Store Hair Samples