Quotes of the Day: RENE DAHINDEN. Plus a Plug for SASQUATCH ODYSSEY Documentary

The Swiss-Canadian Rene Dahinden (1930-April 18, 2001) was one of the first, and surely the most dedicated researchers of Sasquatch on the North American continent. He was also a great wit. One of his last appearances is in the fine documentary, SASQUATCH ODYSSEY, from which these quotes are pulled. Dahinden's critical wise-cracks and built-in bullshit detector balanced the staid, safari-outfit-clad uppercrustianism of Peter Byrne, and the far-out suppositions of others, helping establish Bigfoot research firmly on the ground of common sense. He was also a great opponent of those who would see the creature as "para-physical inter-dimensional nature people." In the film he is even seen ridiculing the sensible scientism of Grover Krantz. 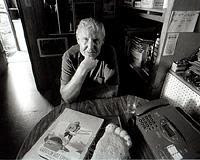 QUOTES:
"Some people say that the Sasquatch to them is just a mythological creature. Nothing to do... it's not a real creature, flesh and blood. If the creature is a mythological creature, the mythology has to COME FROM SOMEPLACE. It doesn't just pop out of a Kellogg's Corn Flakes box!"
"If I would be out there and see a Sasquatch, even if I would photograph him, I wouldn't believe my eyes. I wouldn't trust my own brain. Seven, eight foot, hair-covered, manlike creature out there wandering around in our own backyard. Mind-boggling!!!" 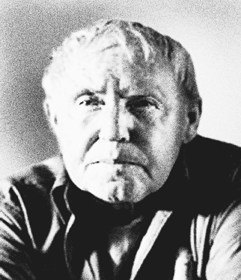 "We know all about Lapseritis. And oh, he had 235 or 500 by now Sasquatch encounters... in HIS MIND! I'm not interested in Sasquatch in his god-damned mind. I'm interested in Sasquatch on the ground, in the bush. How many Sasquatch encounters he's had in his mind--look, I don't want to hear about it! Well, he heard footsteps out the tent, or whatever. Well, that's just like saying you had 235 sexual encounters, but NEVER GOT LAID!"
"I'm not interested in where it comes from. I'm not interested in what it is. Because I'm still wondering IF it IS. I'm still wondering if it EXISTS. So, let's find the damn thing FIRST, before we start asking questions WAY OUT THERE. I don't care because I'm still wondering if it exists."
"Footprints are physical evidence. Someone said, they're not physical evidence! I said, how would you feel if I hit you over the head with one of them footprints' plaster casts??? Don't you think that would be physical?"
Rene's humor and clever wit are sorely missed in this field (no one can take his place, though Daniel Perez does try), especially when some take things just a little bit too seriously. Sasquatch will go its own way, and hopefully Bigfooters will be able someday to prove it. Rene wrote one book with Don Hunter, available in two editions, which is, ridiculously, out of print: 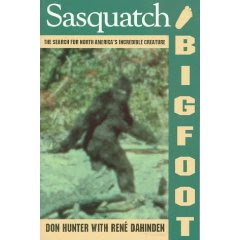 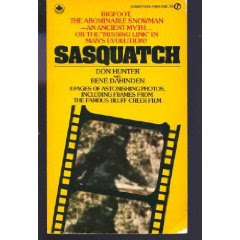 The documentary, SASQUATCH ODYSSEY, may be found on the website of GRYPHON PRODUCTIONS, a Canadian company: http://www.sasquatchodyssey.com/
Their information on Dahinden may be found here: http://www.sasquatchodyssey.com/hrene.html
It may also be found on Amazon, and is out on VHS or a DVD with some apparantly good extra features (we haven't seen this version). Get it!: http://www.amazon.com/Sasquatch-Odyssey-Bigfoot-Rene-Dahinden/dp/B0006H659C/ref=sr_1_1?ie=UTF8&s=dvd&qid=1246409328&sr=1-1 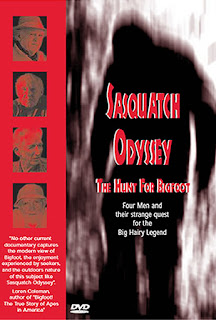 It is mainly the work of Peter von Puttkamer. In the opinion of this blog it is one of the best, most interesting works on film about the Bigfoot phenomenon. It is a study not only of the cryptid hominid/hominoid, but also of the people who follow the beast, and the cultural aspects of the pursuit. Captured in time and animosity around 1999 are the old-school "Four Horsemen" of Sasquatchery: Peter Byrne, John Green, Rene Dahinden, and Grover Krantz. The documentary is special, too, in that it was filmed just before the deaths of two of the "horsemen," Rene and Krantz. It catches Byrne just before his more-or-less retirement from the pursuit. Green is still alive and squatching, though he unfortunately could not make it to this spring's "Bigfoot Round-Up" in Yakima, WA. Also present in the film are some of the newer researchers such as Robert Michael Pyle, Matt Dunlap, and others, and has bits with long-timers such as Lillian and Datus Perry, Ray Crowe, etc. Without being mocking, this film also bears a lot of humor about the subject, which will be a relief for those overdosed on MonsterQuest episodes.
From the VHS box: "The Hunt for Bigfoot: Four men and their strange quest for the Big Hairy Legend. A journey into the bizarre world of veteran Bigfoot hunters: facts, fallacies and fiction." 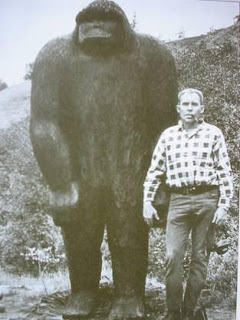 Photo:
Rene Dahinden, always prepared with pipe and camera, poses beside the Jim McClarin statue of Oh-Mah-Bigfoot found even today in Willow Creek. Currently it sits right at the junction of Highway 299 and Highway 96, beside the Gonzalez Mexican Restaurant.
Note: Rene was a pretty diminutive guy, but that statue IS pretty massive.
Posted by Steven Streufert at 1:00 PM