BIGFOOT'S BLOG,
Late March, 2011, EDITION, PART ONE
THE LEROY BLEVINS INTERVIEW,
well, an attempt at one, anyway....
Well, sometimes we worry about the cat walking on the keyboard and accidentally publishing our blog or sending an email for me, with crazy, messed-up cat content. That is how publishing this feels, at times; but we are doing it of our own accord. Last year a much-belabored process produced the wandering, incomplete, on-again-off-again interview with one Leroy Blevins, Sr., which follows. He is known for his, um, "interesting" ideas about the Patterson-Gimlin Film. Call it "alternative history," or perhaps "conspiracy theory," or maybe even "sheer imagination and pareidolia." We wanted to question him about it. He began to ramble, not following the direction or questions of the interview, and then finally coasted right off the tracks, crashing headlong into the JFK assassination. Not too surprising, this, when one considers Blevins also claims to have found the Garden of Eden, Noah's Ark, and that Bigfoot is actually an Edomite. We guess his attention span couldn't hold him, as the interview was actually going pretty well for a while. Rather than waste this material, we're just going to publish it here. Please forgive its fragmentary form. There are great humorous things and some fine PGF minutiae in here, if you know what you're looking for in it. If you thought that the ideas of MK Davis were "out there," then you may be surprised that MK is just a pretty normal guy in comparison. Read on....
Take it with a grain of salt. Blevins provided very little substantive proof for any of this theories. This interview took place a year or so ago, so his ideas and our own understanding have both changed somewhat since then.
Here it is, in the raw. BEWARE! This covers, with illustrations, about 113 pages in WORD. It covers about 70 single-spaced text only pages. Someone should  pay us for doing this!
NOTE: You are looking at PART ONE of the INTERVIEW.
VIEW PART TWO HERE,
or just see below for the next blog entry.
Also... Read our previous blog entry touching on Blevins matters HERE. 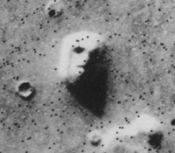 
What is Pareidolia, you ask? Read here: http://en.wikipedia.org/wiki/Pareidolia
******* 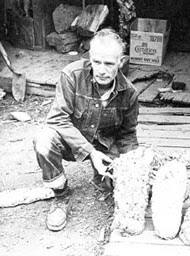 Leroy Blevins Sr. said...
My new site is freewebs dot com/pgfilmanalyze [ANOTHER SITE, NOW DEAD!]
If you like to know the truth and even see the truth go to this site for the best research ever done on the Patterson and Gimlin Bigfoot film.
November 14, 2009 8:28 AM
Steven Streufert, Bigfoot Books said...
Well folks, take the above with a grain of salt. I spoke with Mr. Blevins for a couple of hours on the phone, and extensively discussed these matters via email. He is a good guy, personally, but I think his ideas are a bit out there, and not really substantiated by the film.
November 14, 2009 1:22 PM
Leroy Blevins Sr said...
If you don't mind I like to add on my site I show still photo of John Green and Bob Titmus that they took 9 days after Patterson filmed his movie of the Bigfoot. However as you will see the Bigfoot prints they show is prints on the raod that Patterson filmed Bob Gimlin on. Now in the story Patterson or Gimlin never claim there was prints on the road or seen these prints. However you see these in still photos by John G. and Bob T. Plus it was told that it rain that night after Patterson shot the film but as you will also see the track are like new. For these tracks are the same track was left by the Bigfoot that Patterson filmed.Now think of this, this 1 Bigfoot was seen by two men and ever ran after it why would this same Bigfoot come back to a location days after when it knows that other people will be there for Patterson and Gimlin was there. Sorry but the only away for Patterson to film this Bigfoot and with John G. and Bob T. to also film and take photos of the prints before it rained or even seeing the same print from 1 Bigfoot this show that the film by Patterson and even the film by John G and Bob T was taken on the same day. For even the tracks left by the horses still can be seen on the road like they are new. take a look.
November 17, 2009 9:25 AM
[The Views Following Are Comments From Others, Not Necessarily Those of Bigfoot Books]
Hudge said... Blevins is totally off base,may be a good guy but he in NO WAY proves Patty to be a hoax,in fact,after listening to some of his arguments and proof,I am more convinced that Patty is 100 percent Sasquatch. April 29, 2010 2:13 PM
Anonymous said... The film that Roger Patterson and Bob Gimlin made in 1967 of Bigfoot was real. The creature they filmed was half man and half gorilla. June 2, 2010 1:14 PM
Mikey D said... This is a good blog. I also greatly appreciate Mr Blevins and the time he took to investigate and research these different points he makes. It was a very interesting read. Some parts did make me smile though I have to admit. I mean there is a close up of a monstrous ape leg with strained and bulging muscles and the arrow is pointing underneath labeling where 'some fur has come out'! Classic. What about the giant leg muscles?? And check out the pendulous breasts, the nipples, it all looks just too real to be a hoax. Interesting work though, we need both sides of the debate to fully conclude. July 20, 2010 2:41 PM
Anonymous said... In my opinion, Leroy Blevins is an undeducated man looking for attention. He boasts about having the "best" bigfoot research ever done. Yet, he can't construct a simple sentence. His tag-line is "we show it"....yes, you "show it" alright...you show how stupid and lame you are. Blevins "research" and "conclusions" suck much ass.
Anonymous said... Mikey D is right!!! You have to look at all possibilities as far-fetched as they may sound. The subject of Bigfoot is in the "far-fetched" category. Mr. Blevins's research and opinion are part of this subject. I wish I had the time and commitment to research the subject but I don't. I am just glad there are persons out there that do research on the subject because it keeps the subject fresh in our minds. I will read anything on the subject of Bigfoot, good or bad, because it interests me. Keep up the good work guys and keep the info coming. February 15, 2011 11:17 AM
*******
THIS BLOG POST TURNED OUT TO BE TOO LONG! AT 113 pages in WORD with images, about 70 text only, we've had to divide it into two parts.
READ PART TWO OF THE INTERVIEW HERE.
******* 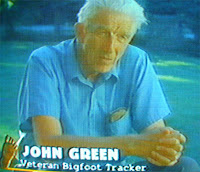 Quotes from John Green may serve to end this all-too-massive blog entry, for now....
JOHN GREEN: I have tried reasoning with Blevins, to no avail. Nothing left to do but ignore him....
Why does every crazy need to be refuted? MK and Paulides had earlier acquired a following with their work in this field so they needed to be answered when they went astray, but who is this guy that anyone should worry about him?

ANGRY BIGFOOT SPEAKS!
Me try reason with Leroy. Me stand there right in road for four minute so he see me, me say me NOT some Edomite. Me not even believe God. Me no need. Me shrug shoulder. Me walk away, leave stink behind for him. What me do? He no listen, never will, he stare at blurry picture all day when he maybe could talk to real Bigfoot who KNOW what happen. Me there when they make film. She hot babe Bigfoot, girlfriend at time.
This blog is copyright and all that jazz, save for occasional small elements borrowed for "research" and information or satirical purposes only, 2011, Bigfoot Books and Steven Streufert. Borrowings for non-commercial purposes will be tolerated without the revenge of Angry Bigfoot, if notification, credit, citation and a kindly web-link are given, preferably after contacting us and saying, Hello, like a normal person would before taking a cup of salt. No serious rip-offs of our material for vulgar commercial gain will be tolerated without major BF stomping action coming down on you, hu-man.
Posted by Steven Streufert at 5:53 PM