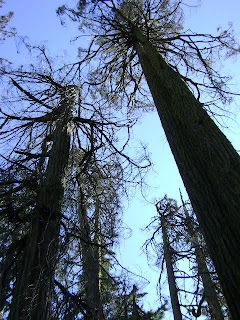 The Hoopa newspaper, TWO RIVERS TRIBUNE, on November 3, 2009, Volume 15, Issue 43, has just published an article about the Port Orford Cedar (Chamaecyparis lawsoniana) situation in the Fish Lake and Blue Lake areas just west and south of the classic Bluff Creek Bigfoot territory. The paper's article is not yet posted online, but it should be archived soon. Reporter Shelly Baldy interviewed Orleans Ranger District silviculturist, Todd Salberg on the situation. For now, we will summarize it for all of you.

Images, CLICK TO ENLARGE: Above, dead and dying Port Orford Cedars at Blue Lake; Below, among the lichens and moss, the grey fungus grows.

Almost fifty roads in the Six Rivers National Forest have been closed for the season to stop the spread of the non-native fungal disease that attacks these beautiful trees in particular, killing off their root systems. The Forest Service regularly closes these roads in the winter and wet seasons, but the situation seems to be getting worse. There is no known cure or abatement for this disease, the only tactic known being trying to stop the spread of the infestation. The exotic fungal disease began to enter the wilds in the 1920s. First spreading from Washington, "It was introduced in a nursery south of Seattle and escaped and eventually moved down to northern Oregon," stated Salberg. 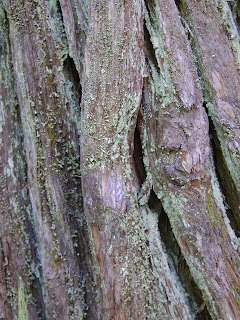 The first known case in Six Rivers National Forest was at Blue Lake, discovered growing on a cedar that had had a limb cut from it, introducing the spores, in 1996. We of Bigfoot Books investigated the situation this summer, which is when the photos of cedars used in this blog entry were taken. The problem is that, quoting Baldy, "After the disease infects its host, it begins to spread through the water source. In the case of the Blue Lake area, it was a death sentence for the entire Bluff Creek area."  Especially problematic is that the fungus moves down watersheds through the watercourses, so an infestation at a spot like Fish Lake, or up the canyon further, can infect the entire area.

See our previous post on this issue HERE. Read on....

And now the fungus has been located in a new spot up the watershed, right above bigfooting's Mecca, Louse Camp, just down from the P-G film site. It is up in the area above the camp, too, up from the main creeks, so it could only really have been spread by human (or Bigfoot?) incursion. "Today, Salberg said, nearly all of the POCs located on Bee Mountain (also referred to as Bluff Creek) are infected." The Forest Service thinks that the fungus was spread into there due to marijuana cultivators--it was in a brushed over area without previous animal and other trails--but it could just as well have been... BIGFOOTERS who spread it in there.

This means YOU, bigfooters--this is where YOU might come in. 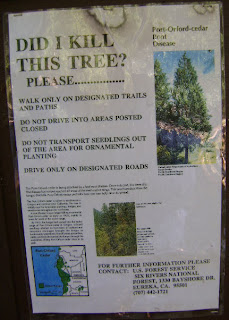 See, every time you hop that gate and tramp on in to the Fish Lake area to do your off-season call blasting and wood knocking while out squatching you may in fact be causing this fungus to spread. It is carried on boots and tires of cars. especially the knobby kind, under wet conditions. Think about it: is it worth killing off these amazing old growth trees, the hidden glory of the Bluff Creek area, and damaging Bigfoot habitat while at it, just to get your glorious evidence and adventure?  This applies to hunters and fishermen as well. Not only are these habitats and trees important to wildlife, but, the article states, they are important to Native American culture: "Because POCs are used for the Tribal cultural uses, which include storage units, planks for traditional xontas (homes), and for spiritual cleansing, if the disease entered the forest on the reservation it could be detrimental to the Hoopa Tribe." So please, be respectful, be careful, think before you go in there, especially if it is closed with a gate. Think before you wear the same boots to Fish Lake, and then to other spots in the Bluff Creek basin wearing those shoes. The impact could be way worse than just your footprints. If these trees are gone, if the habitat is permanently damaged, your chances of seeing a Sasquatch will simply be all the less! And there is no cure. Not only this, but look: every year those roads are closed longer and longer in the early summertime, long after the snows on the roads have melted. If this situation gets worse we could find our bigfooting in the Bluff Creek area effectively restricted for most of the year!

Images: Above, sign tacked on the fence at Blue Lake, Did I Kill This Tree?"; Below, "Two healthy looking Port Orfords and one fir along the Blue Lake shoreline.

The fungus is thought to be alien to the USA. The Port Orford Cedar is a wonderful, redwood-like tree that grows to great heights and girths, and covers a very limited range in only the most ideal habitat zones. So, it is crucial that these small areas where they grow be protected and respected. 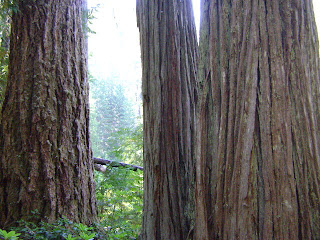 
From the Wiki page, here is the full description of the disease affecting them:

"In the wild, the species is seriously threatened by a root disease caused by the introduced fungal pathogen, Phytophthora lateralis. This disease is also a problem for horticultural plantings in some parts of North America. The tree is sometimes killed, though less often, by other species of Phytophthora. Phytophthora lateralis infection begins when mycelium, from a germinated spore, invade the roots. The infection then spreads through the inner bark and cambium around the base of the tree. Spread up the trunk is generally limited. Infected tissue dies and effectively girdles the tree. Large trees are more likely to be infected than small trees due to larger root areas (although all trees at the edges of infected streams will eventually succumb). However, large trees can often live with the infections for a longer duration (up to several years)." 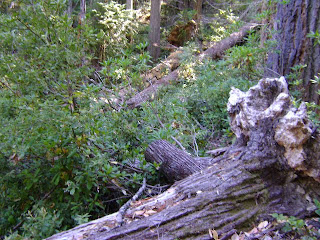 Image: Downed trees, with the root rot clearly visible on the Port Orford in the foreground.

"Port Orford 'Cedar' [it is not a 'true' cedar] in streamside populations are highly susceptible to Phytophthora lateralis infection. However, the rate of Phytophthora spread through populations in dry upland areas appears to be slow. Phytophthora lateralis spreads through water via mobile spores (zoospores). The fungus also produces resting spores (chlamydospores) that can persist in soil for a long period of time. New infections generally begin when soil is transferred from an infected population to a non-infected population via human or animal movement. After initial infection in streamside populations, secondary spread via zoospores quickly infects all downstream individuals." 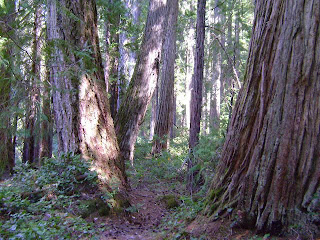 "Human facilitated spread is thought to be responsible for most new, and all long-distance, infections. Soil on vehicle tires, especially logging trucks and other off road vehicles, is considered the most pressing problem due to the volume of soil that can be carried and the traffic rate in and between susceptible areas. Spread on boots and mountain bike tires has also been suggested and probably contributes to new infections locally. Animal facilitated spread is thought to occur, but is localized."

"The Bureau of Land Management (BLM) and United States Forest Service (USFS) attempt to prevent Phytophthora spread through road closures, monitoring, research and education. Research has focused on determining the dynamics and mechanisms of spread, as well as attempts to breed resistant trees."
Source: Wikipedia, accessed on November 4th, 2009, at: http://en.wikipedia.org/wiki/Port_Orford_cedar. View this link for futher information and identification of this special breed of tree. 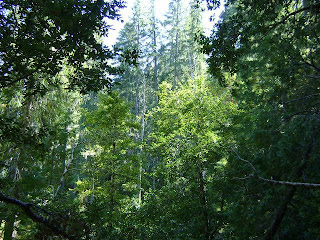 Images: Above, a trail around Blue Lake, among lovely but affected Port Orford Cedars; To left, the lush and green, but infected habitat of the tree, including tan oaks, madrone, Douglas fir and spruce as well; Below, Blue Lake covered in lily pads, cedars in background.

All images used here Copyright 2009, Steven Streufert and Bigfoot Books (CONTACT). They may be used with permission, citation and link to this blog, especially if it is in the cause of the Port Orford Cedar. 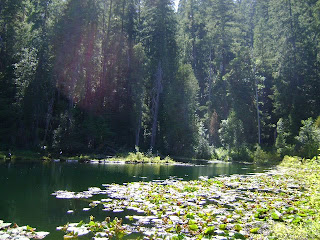 Me not more angry coz me already angry of this one! How you hu-man feel if me come into dumb little hu-man house box, leave Bigfoot stink you no like (me do!) on couch, eat all hu-man food and drink beer, leave mess and my bigfoot poop log on your floor? Me will do if you do not be nice to my tree! Serious, me got big time stinky to put in your living room, and me make pee pee on you car door handle, hu-man!

Posted by Steven Streufert at 7:04 PM