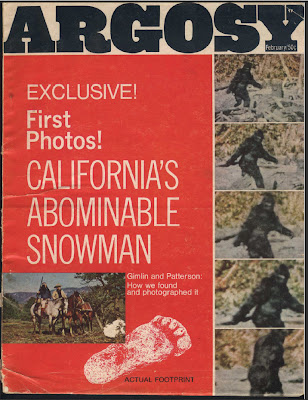 In honor of its 43rd anniversary month we present a slightly down-scaled historical research copy of the rare and important Ivan Sanderson article on the Patterson-Gimlin Film from the now long-defunct ARGOSY MAGAZINE, first published in February, 1968. This was the first major publication of the film images in color, and an fine initial presentation of the story and the early scientific reaction to the film and its controversial subject.

We hope this clears up certain conspiracy theories about where and when the film was shot. Some have suggested that the Yakima footage shot by Roger Patterson was actually filmed in Bluff Creek, trying to substantiate the tenuous and dubious notion that Bob Hieronimus, Jerry Merritt and other Washingtonians were present that day in October, 1967. Not having access to the original pictorial parts of this article, these "theorists" have stated that the article confirmed the presence of individuals from an earlier 1967 Yakima project were actually there in Bluff Creek in October. No, folks--that image on the cover showing Bob Gimlin in "Indian Tracker" garb was for a fictionalized docudrama filmed around the Yakima area before the non-fictional expedition the two (NOT three, not more) took down to Bluff Creek later that same year. The image on the magazine cover was only put there for popular appeal by the publishers. It is not from "Film Roll Two," or anything like that. Look at the setting... that is NOT Bluff Creek in extreme Northern California.
Again, we say, "for historical research purposes only"--this article is too important for it to languish only in tattered copies found on eBay, or in the entrance lobby to Cinnabar Sam's Restaurant in Willow Creek.

SEE BELOW for the article, and click images to enlarge and read.

SQUATCHMASTER "TREE-BREAK VIDEO" HOAX UPDATE
Last blog entry (See Details HERE) we talked about a hoax perpetrated by a certain YouTuber-hoaxer calling himself "The SqauatchMaster." Well, more information clarifying what is really in that sub-viral "tree break" video clip from Ohio's Salt Fork State Park has emerged. The film subject was one of the hoaxer's sons, wearing the same outfit seen in other of his dad's silly staged "evidence" of his own folly. He thought he could fool and mislead serious researchers such as TCSJR-Bigfoot, Tim Stover, and others. The images from the hoaxer's YouTube pages, and his comments from his true "Jeffery Patterson" Facebook identity, seen below, are courtesy of Nancy Snodgrass, who captured the screen shots and was the instrumental figure in exposing this hoax, later revealed in full on Stover's BlogTalk Radio show. A year ago, the "SquatMaster" was caught hoaxing, so it seems he was never sincere about his BF hunting activities. And now, add to the story... Yet ANOTHER monumental FAIL from FB/Find Bigfoot! Read onward...
Astonishingly, FIND BIGFOOT-FACEBOOK (http://www.facebook.com/FindBigfoot) are still clinging on to the idea that this video clip could actually be real. This after their stunningly blind claim that it was real, and the "6th Best All-Time" Bigfoot footage. The case was investigated by Stover, and no evidence of Bigfoot was found around the tiny 3-inch uprooted tree, and the case was dumped in its deserved trash bin. It would seem, however, that Bigfoot on Facebook hasn't gotten that memo. Now SquatMaster has let it go to his head, and is bragging (just like Tim Fasano) about the high "ranking" of his video. Way to go and ENABLE the hoaxers, FindBigfoot! Now BF-FB say they are "investigating" the video and its provenance, which is a wise semi-retraction, but they are buying the guy's latest story that the video was real, after all. This DESPITE the SquatMaster's clear and apparently totally honest confession video (now removed from YouTube by him), where he stated that he did not in fact believe that there were any Bigfoot in Salt Fork, and further, that Bigfoot was only a legend from the old Indian days. How many times have these statements changed? How many times has a new version of the video been posted? Which one do YOU think is a lie? Someone who prevaricates to this degree should just not be trusted. He has cried "squatch" and "not squatch" a few too many times for our taste.
Here is some of the evidence against this joker...
Still have some lingering doubts? Just read...

"SquatchMaster" Jeffery Patterson's own CONFESSION:
"Truth be told,the Bigfoot is is nothing but a legend. It is a mythical creature of old Indian legend. Anyone that believes in such a creature is only lying to themselves. Has Mr. Stover EVER had any proof shown that he has seen one? NO! Why? B...ecause he is aware that they are only legend. Furthermore this video only shows one thing,that I did have a plan in case this creature was real and I crossed paths with it. I just didn't drop to one knee and start filming has he stated he would. Mine was a plan of action. I could really care less what he or anyone else says because of his threats. Just remember this, he is the one that wears the 'noggin condom' and just where are condoms worn? Right on.. he is a dick head."  WE SAY: Look in the Mirror, SquatMaster.

Bigfoot on Facebook's latest vacillation:
"We are investigating the "squatchmaster" video from Salt Fork State Park Ohio. Speaking to all parties concerned, we finished an interview with Tim Stover tonight who was extremely professional and matter of fact. We have traded a score of emails and will speak to Jeff (squatchmaster) tomorrow regarding the circumstances around the video and all of the decision making subsequent to the video editorials. It should be said that Jeff, stands resolutely behind the video and does not want the video discarded as a hoax. Stover and others with extensive experience at Salt Fork also, need to be heard. Put the video into the "unrated" category until completion of and full report.fullinvestigation.investigation."

OK FBF-FB!!! Will do. It's done. We know the truth now. It's over. Sorry.
A fun COMMENTS thread may be read on the SquatchMaster controversy beneath the wall photo on their page HERE.

*******
More Goofiness at Find-Bigfoot-Facebook....
CAMOUFLAGING FBF-FB ERRORS?
Someone should really start trying to save initial copies of the videos these guys post, as they make some really goofy errors which are later edited out to avoid embarrassment. This last week featured a video on camouflage, claiming that Bigfoot was 100 times more effective at camouflaging itself than other animals, even after showing some really amazing video of how effectively the octopus can change color to blend in with the most challenging settings. Bigfoot is normally reported as brownish, and doesn't change color to, say, blend in with red leaves, blue in water, or whatever. Guys, please, how many degrees do you supposedly hold from accredited universities? Are they really in wildlife biology?
Anyway, the most impressive error they made this time was the use of a RAY-BAN sunglass ad, clearly unnatural and digitally processed, showing a chameleon changing colors to match the various shades of the new line of vari-colored shades. Hilarious! Before they took the video down and edited it we managed to view it, and present here for your viewing pleasure a screen-capture the image above of the chameleon they took to be real on their very own Facebook page.

The new FBF-FB camouflage video, edited to remove their fallacious and silly errors is HERE.

Here is the SNOPES.COM page totally debunking the "urban legend" of the CHAMELEON CHANGING COLORS, complete with the video of the sunglass ad embedded. If FindBigfoot believed this, ask yourself: WHAT OTHER STUPID ASSUMPTIONS ARE THEY MAKING? We leave the conclusions to you.

*******
Here are the contents of the ARGOSY MAGAZINE, FEBRUARY 1968 PGF article, for historical research purposes only, and to clear up a few conspiracy theories.
CLICK IMAGES TO ENLARGE AND READ. 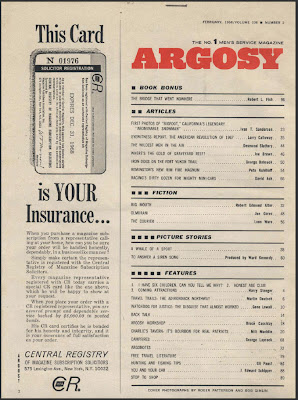 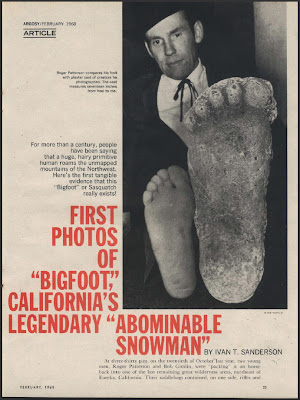 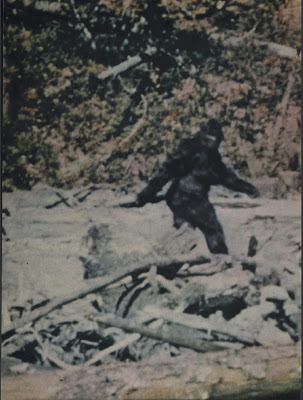 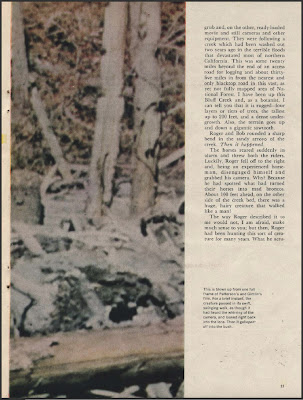 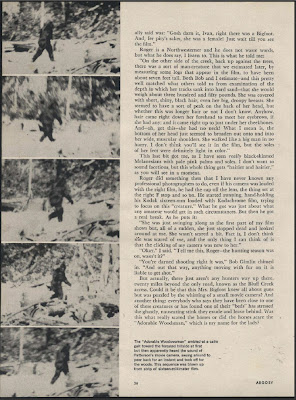 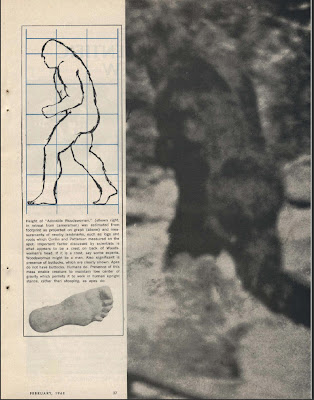 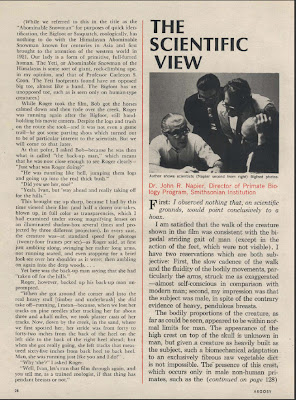 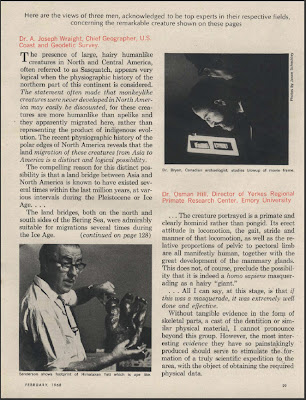 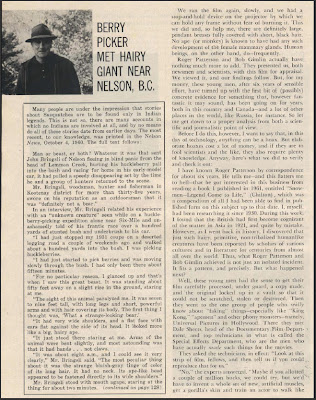 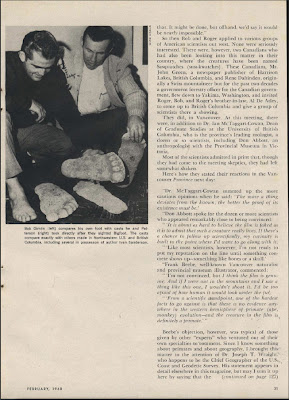 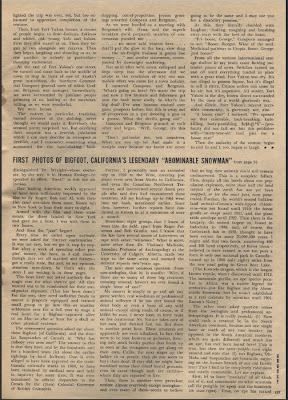 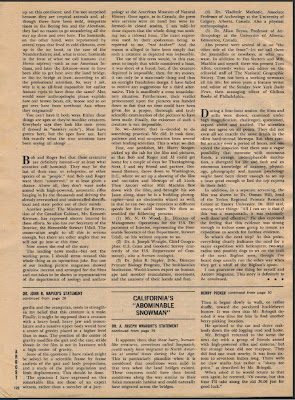 (or rather, mutters and grunts)