On the Road to Bluff Creek (Bigfoot Story, 40th Anniversary of the Patterson-Gimlin Film) 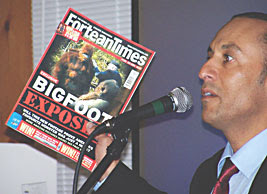 On the Road to Bluff Creek

With the faithful on the Sasquatch Stations of the Cross
Story and photo by Steven Streufert
(Originally published 11/07)
Conference presenter Daniel Perez critiques the Fortean Times magazine.
"Roger and Bob rode out that day/Their lives changed in every way/So did ours 'cause we got to see/A living Bigfoot, walking tall and free," sang Tom Yamarone, belting out the verses of one of his Bigfoot folk-historical ballads. Yamarone's lyrics rang true inside the Willow Creek VFW Hall a couple of weekends ago, where 50 or so members of the Sasquatch community gathered to celebrate the 40th anniversary of the fabled "Patterson-Gimlin film." The film, shot by the "Roger and Bob" of Yamarone's song, is the most solid Bigfoot evidence ever presented. (See "Bigfoot Trapped By Norcal Fanatic!" Oct. 18.)
Believers from near and far made the pilgrimage on Oct. 20 — first to Willow Creek, and then out to the remote site where the film was shot, there to pay their respects to the historic event and to share the latest research.
A shimmer of possibility filled the VFW Hall. Bigfooting, it seems, is as much about the community of 'Squatchers as it is about the Giant Hairy Ape itself.
Something had changed these folks who, despite otherwise ordinary lives, were ready to pursue to the ends of the Earth a creature most consider a phantasm. Curiosity and the spirit of rational inquiry were readily apparent, noted in thorough documentation covering the walls. Noting no sign of lunacy, it occurred to me that the crazy ones were the journalists sitting in their barren offices cranking out the same old dismissals.
Daniel Perez, authority on logistics of the making of the Patterson-Gimlin film, argued that the subject could not have been faked. That muscle mass moving with each huge stride, the height and inhuman proportions — could that have been produced with padding and fake fur? The strides through the film site of a 6'4" man reveal his tiny homo sapiens form beside a creature that could smash him with one stomp. ("If the suit doesn't fit, he must exist.")
No one has been able to replicate the film, even with a $75,000 BBC budget. Perez presented a 16mm Kodak Cine-100 home movie camera, the model that Roger Patterson and Bob Gimlin used. I felt its awkward bulk and saw the creature on the projection screen through its tiny, dim viewfinder. How anything was captured by this camera with its tiny 16 mm cartridge is miracle enough.
Legendary Al Hodgson, for decades the operator of the general store, also spoke. He was a contact not only for the Patterson-Gimlin film but also the 1958 activity in the area, when tractor driver Jerry Crew brought giant footprint casts down from the Bluff Creek road construction zone and made front page news in the Times-Standard and papers globally. This was the birth of "Bigfoot" as a media phenomenon. Presenting the recent North Coast Journal with its cover's tabloid parody, Hodgson said: "You may have seen this — don't like it." Chuckles and groans emerged. Bigfoot was not a joke to this crowd.
Hodgson presented tales told to him by locals, without even a hint of the tall tale in the telling from this 83-year-old church-going business and family man. Of one of his informants, Al said, "He is not lying — know him too well." Hodgson saw sightings as ordinary. The Sasquatch is a consistently documented though elusive primate, the origin of old frontier tales and centuries-old Native cultural representations. Without seeking it out, people see it, hear its howls and vocalizations, find footprints or feel its wild, cunning eyes gazing from hillsides that could hide just about anything.
Cliff Barackman spoke lovingly of his "foot fetish," with evidence that footprints found in 1958 appear to have been made by the same individual in the 1967 film (as confirmed by Idaho State anatomist and physical anthropologist Jeff Meldrum). Scott McClean traced the history of newspaper reporting going back to the 1840s, predating the birth of hoaxer claimants like Bluff Creek road contractor Ray Wallace by nearly a century. David Murphy outlined the biography of Roger Patterson — author, filmmaker, cowboy, acrobat and inventor. Humboldt's James "Bobo" Fay completed the round with tales of early 1940s Bluff Creek bigfooter Irwin Supple. The event concluded with a convivial champagne toast to Roger and Bob. Then plans for a convoy into the mysterious hills to the north were made.
The miles upon miles of real wilderness in the Six Rivers National Forest, accessed by hellish boulder-strewn and mud-laden dirt roads to the middle of nowhere, embody the wild mystery. The high-speed night trip led by Bobo, who seems to treat these mountains like his local neighborhood, was a soul-wrenching experience in itself. My little VW started bottom-grinding in thick snow at about 4,000 feet. After two hours of nasty tree-dodging, slippery hell, we crossed the 1958 bridge and entered Louse Camp, down on Bluff Creek. This was a place of history, where the 1959-1962 Pacific Northwest Expedition had set up digs. Bustling with activity and a roaring campfire, a keg of Bluff Creek Ale (note the Bigfoot on the label) was already tapped. A call-blasting speaker system and high-tech thermal imaging gear was out.
Later I walked with Bobo down the road illuminated by the white thermal viewer's glow as we sought forms in the dark. His group had seen Sasquatch activity in the last few months just a few yards away. With sentries staked out in turns on the hillside, the campfire devolved into folk songs and Bigfoot tales. I was up until 4 a.m. discussing the paranormal and psychic aspects of the phenomenon, multi-dimensionality and string theory with sometime paranormalist author and field researcher Thom Powell. A schoolteacher and logical man, he brought up Occam's Razor — the idea that the simplest answer is often the best one. Actually, the existence of a Bigfoot creature explains it all with more facility than hoaxing or hallucination.

The next day, descending about 2,000 near-vertical feet to the creek below, we made our way to the film site. Soon we found ourselves gazing upon what looked like footprints only 30 yards from our vehicles. Stunned, I immediately felt the energy of conversion starting to overcome me. One print in shallow moss and mud measured 22 inches. Toe shapes were visible. Preceding this in a patch of moss was another browned and deadened area, foot-shaped. The step between them was six feet, about double that of the average human.
Researcher Scott McClean calmly got out his ruler and measured the particulars, took a quick photo, and moved on. I stood stunned. Could it be real? It's inconclusive, he said; a "blobsquatch," is all. That's just squatch-on-the-brain, he said. What we need is real, provable evidence.
With the Weekly World News defunct, can Bigfoot at last roam freely into our unbiased awareness? There is more evidence for Sasquatch, tangible and scientific, than there is for God, the Devil, reincarnation or the soul. One doesn't catch fleeting glimpses of Babe the Blue Ox. Sasquatchers are in search of the last mystery of the wild American land, the living embodiment of the fact that humans are not the central meaning of the earth, nor in complete knowledge or domination of it.
Asking about my angle on this story, McClean said, "Just don't use that word, 'believe.'" It is not, he said, a matter of faith, but of fact — it is out there. Hoaxes and hallucinations do occur, but the time has come for us to consider that perhaps there is more to the natural world than dreamed of in our philosophies. These guys are living it.
Originally published in Humboldt County's NORTH COAST JOURNAL, November 1, 2007.
http://www.northcoastjournal.com/110107/news1101.html
See their other Bigfoot article here: http://www.msplinks.com/MDFodHRwOi8vd3d3Lm5vcnRoY29hc3Rqb3VybmFsLmNvbS8xMDE4MDcvMTAxODA3Lmh0bWw= . 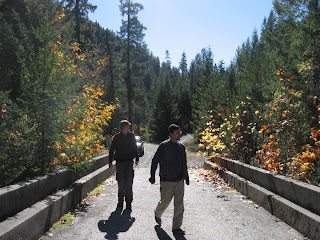 Full disclosure — Steven Streufert is the owner of Willow Creek's Bigfoot Books.
Photo: Bigfoot historian Scott McClean and the Author on the Notice Creek Bridge, constructed in 1958 by Jerry Crew and crew. Just up from Louse Camp on Bluff Creek. Courtesy of Tom Yamarone; find him at:
http://bigfootsongs.com/
Posted by Steven Streufert at 12:26 PM