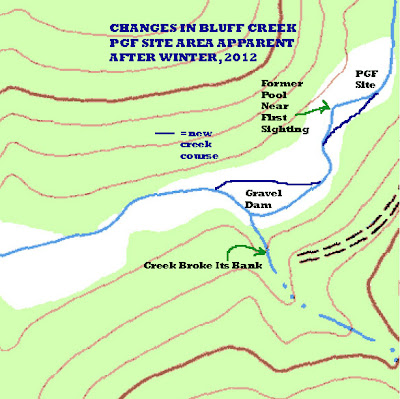 Members from the Bluff Creek Film Site Project finally made it back into the Patterson-Gimlin film site area over the June 23-24 weekend (and of course, despite it being June, it rained on us). We found many changes in the creek had occurred over what was a fairly mild winter. This was due in large part to the fine job the US Forest Service had done when closing down the former dirt road down to the creek. They tore out the culvert and made banks for the small feeder creek that enters Bluff Creek just below the filming area. This was supposed to be the new creekbed, hence destroying the old road and any vehicle access down to the site itself. The creek, however, wasn't having any of it, and tore out a large portion of the gravel, grass, groundcloth and branches that were supposed to prevent erosion. This debris all ended up in the "big gulch" at the bottom of the general film site area. A dam was thus created, which forced the creek to flow into its northern channel, right up at the edge of the lower sandbar. Hence, access down into the creek has changed, and a whole course area was closed off with gravel and sand. Now there is more log hopping and less wading involved in getting across the creek and up on the sandbar. Some good aspects, and some bad; but it shows how things can change in a major way in just one season.


We were happy to find that the upper sandbar, where the PGF was actually shot, was still intact and unharmed. Our survey flags were all still there, save for a few chewed up by animals, and the test tracks we had made in the sand were still there. This latter confirms what John Green said, that he and Jim McClarin had returned to the site in June 1968, upon its first opening after the winter right after the October 1967 film was shot, and that they found the trackway of the film subject based upon tracks still visible in the sand and gravel. Well, folks and debunkers, it IS POSSIBLE. We proved it. We left our test tracks uncovered, in unsheltered areas, and dug them down to the approximate depth of the PGF creature's tracks. They were easily discernable after the eight months elapsed since we'd left them in late October. If our tracks lasted, there is no reason that the ones left by the film subject could not have. This means that this part of the claims of debunkers is wrong. Bob Gimlin did not lie about the tracks being covered, as Titmus found and cast them in good condition. Green and McClarin almost certainly did not lie about the trackway being found the  following summer, and in fact could have replicated the course of the subject accurately. They could even have found the boot tracks of Patterson at his filming spot, for that matter, if they were dug in distinctively and deeply in one area. The sand of the Bluff Creek bar does in fact have the capacity to hold disturbances for a number of winter months, it is now undeniable.


Up by the upper sandbar, right in front of the filming spot, we found the big pool with the logjam that is probably the spot where the duo first saw "Patty" squatting by the creek is now gone. The damming of the creek below apparently had effects several hundred yards upstream. Now the pool is empty, with a large wall of exposed layered PGF site sandbar exposed for the interest of geologically minded squatchers. The creek has formed a new course to the south a bit, now flowing right up to the tree and bank where Bob Gimlin identified the spot where they were when they first saw the creature. The historic spot is still there, but just barely. All of this demonstrates the malleability of the creek's course, but also the durability of the big, high sandbars created by the massive flood of 1964. One can see how the PGF site itself has outlasted the years due to these factors, and still sits quite elevated and aloof from the changing torrent of the creek beside it. We have observed and shown over four years now that the sandbar of the PGF site does not get over-washed by creek flooding, nor has its substantive part been washed away by creek erosion. Later this summer we will have numerical data estimating the amount of loss to the "front" of the site on its southern side due to erosion of the creek banks there. It is not a significant amount of loss, by my own eyeball estimation. Bill Munns should be able to tell us the distances with a high level of accuracy from frame-by-frame film analysis compared with on-site measurements.


The following photos were all taken by me, and copyrighted, even though they are often kind of blurry due to the low light conditions in the overgrown sandbar woods, which my tiny cell phone camera does not like too well.

And here,
I will leave you with a better photograph from the next day's investigation of the Dry Lake BFRO Thermal Sighting. More on that in the next blog entries....
UPDATE: Jim McClarin himself commented on this post...

"McClarinJ, July 19, 2012 6:57 PM
Oh boy, I'm not a liar ;-) Let me say that the tracks John and I saw in the summer of '68 during our recreation shoot were not distinct enough to have been recognized as Bigfoot tracks by us if I had not seen them shortly (two weeks?) after Titmus had been there or if we had not recognized the site from the film."

Hey Jim, I'm always happy to prove that the good old boys were telling the truth!

What me Angry? That be my name. But me not angry, for real. Me say thing I heard hu-man say, which make sense good. "I used to be disgusted, now I just try to be amused."