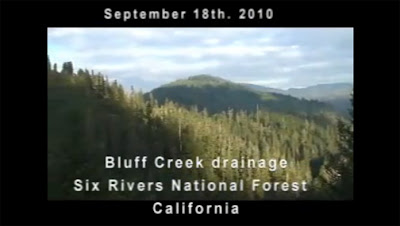 Here are EVEN MORE! Videos Nine through Thirteen of our BLUFF CREEK FILM SITE PROJECT have now been posted.

Have you seen the first eight??? WATCH PARTS ONE THROUGH THREE HERE ON BIGFOOT'S BLOG. Click the link now or forever regret it. WATCH PARTS FOUR THROUGH EIGHT HERE.
CLICK PLAYER BOXES BELOW TO VIEW YouTube WITHIN THIS PAGE.

*******
Here are more of the fruits of our summer's work, completing Robert Leiterman's footage and editing of our first exploratory filming trip to the Patterson-Gimlin Film site area. Here we explore, in the pouring rain, the main General Consensus Site, in areas identified by Peter Byrne, Christopher Murphy, Daniel Perez and Cliff Barackman (after Gimlin, who told it to Bobo). Later episodes will cover our more extensive second trip, where we hiked up the creek and located all potential sand and gravel bars, including some down below the area up in the more northern part of the creek, similar to the one described by Al Hodgson. We also explored the MK Davis-identified site, just a bit downstream from the area known mainly from Daniel Perez' booklet, BIGFOOT AT BLUFF CREEK

We've received comments and some controversies have already arisen. Just today Al Hodgson was in our store, and insisted that the upstream consensus film site is not the true site, but that it is rather closer to the Bluff Creek Bridge, up from Louse Camp. It bucks against the opinion of nearly everyone, but just a week and two ago we received two anonymous commenter's views that the site is downstream from where most place it. One view goes as far as a mile and a half downstream, and claims to be based on the word of Rene Dahinden, just like Perez' site location does. These debates will be covered in future blog entries. So, stay tuned for more! Enjoy the latest finished videos for now.

*******
Here is PART NINE of our BLUFF CREEK FILM SITE PROJECT on BFRO-VIDEOS on YouTube. Here we're down in the gulch of the "general consensus site," looking at big trees and giant root balls and logjams.

Here is PART TEN of our BLUFF CREEK FILM SITE PROJECT on BFRO-VIDEOS on YouTube. Here we're down in the gulch of the "general consensus site," moving upstream. We see the "big bend" and tree root systems "as big as a room," just as Gimlin described them. Up from the Murphy site we move toward the Daniel Perez/Rene Dahinden arrow-marked spot.

Here is PART ELEVEN of our BLUFF CREEK FILM SITE PROJECT on BFRO-VIDEOS on YouTube. Over the creek and through the woods, to Barackman's site we go, onward through the rain....

Here is PART TWELVE of our BLUFF CREEK FILM SITE PROJECT on BFRO-VIDEOS on YouTube. Herein those intrepid explorers brave drenched hypothermia to get to the "bowling alley," and then up onto the sandbar to look at big trees on the Barackman-identified site.

Here is PART THIRTEEN of our BLUFF CREEK FILM SITE PROJECT on BFRO-VIDEOS on YouTube. Herein we look at a lot of big trees for THE Big Tree. This is the end of "Day One," with a bunch more videos of our second trip coming up.

If the above embedded video boxes don't pop up do check for them at BFRO-VIDEOS on YouTube. Look in "Uploads" and then "See All." There's a lot of other cool stuff in there.
Or just click one of these links:
PART NINE
PART TEN
PART ELEVEN
PART TWELVE
PART THIRTEEN
*******************************************************
BIGFOOTING NEWS!
Too many of our Bigfooting friends seem to be getting on TV these days! Well, good for them, though the results are often more humorous than seriously Squatchy.
Here are two that appeared recently. Click the links to view them online.

REAL AND CHANCE: LEGEND HUNTERS, EPISODE  6: BIGFOOT,
with our friend RIP LYTTLE. As Rip says, this is "How NOT to hunt for Bigfoot"... Hip Hop Bigfooters? This is very bizarre... watch the full 41-minute episode
Also:
STRANGE DAYS WITH BOB SAGET: LET'S GO SQUATCHING (The Search for Bigfoot)
with our BFRO friends Bobo, Tom Yamarone, Mike Rugg, Matt Moneymaker, Paul Graves, Derek Randles, Bart Cutino, Cliff Barackman, and many others appearing or just slightly off camera. Watch the full 22-minute episode here, after you skip the commercials.

*******
LENNY GREEN, a Bigfoot bard who often sounds like a squatchy Johnny Cash, has released a bunch of new Bigfoot-themed songs on his web site. You can listen to them there, or look around and you'll find a link to obtain your own copy of a CD of his works to date for free or donation. You might remember Mr. Green as the fellow who performed during intermissions at this summer's Oregon Sasquatch Symposium (he's scheduled for next year's event, too), and as the author of classics such as "Piney Woods Wildman" and "Roger, Patty and Me."
Just go to http://www.bigfootsong.com/.


New songs include the touching slow ballad of a lonely outdoorsman, "Waiting for a Bigfoot to Come By," the rousing "Bigfoot USA" and "You're a Witness Now!" One will also find a poem read by Green called "Hairy Man," and other songs like "Don't Pull That Trigger," "Where the Wild Things Go," "The Ballad of Ape Canyon," and "Running Bears."

Hu-man, how me tell you this? Me think me considerate me tell you, so I do. You smell bad. Me say, eat more garlic, roll in mud and forest leaves, not take bath in stinky soap. Me say you do better if you smell nature like. No fake stink under arm. No gut wrench flower smell on lady neither. Just be self, smell like self. I smell bottle in woods some litter-hu-man drop there. It say "Old Spice." Me sniff, me want puke. You sick hu-man. Jump in river get wet. That enough.