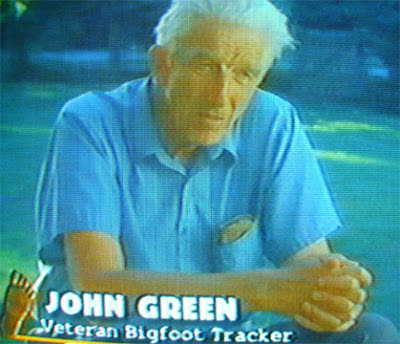 HAPPY BIRTHDAY TODAY TO JOHN GREEN, THE "MOSES" OF SASQUATCH RESEARCH. HE IS 86 YEARS OLD TODAY.

What follows was sent to me by Canadian researcher, Bill Miller, on behalf of John Green. It asserts some novel ideas about the evolution of hominins, but also reiterates the long-held theory that Bigfoot actually is (or is a descendant of) an already known species, the supposedly extinct giant ape, Gigantopithecus blacki.

I asked John a question about this and got a nice, long reply from him. That, too, is included below (exclusive to this blog), used by permission.

Although it appears to have been overlooked by all media for several years the material presented below will inevitably become one of the greatest news stories of the century. 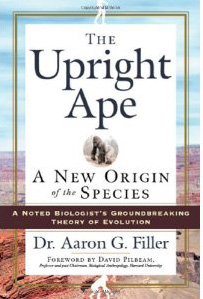 Sometimes It Pays to Be Not a Scientist.

Dr. Aaron Filler, in his 2007 book “The Upright Ape,” presented ample evidence that all higher primates have been bipedal, walking upright on two feet, for over 20 million years.

You don’t have to be a spine surgeon, which Dr. Filler is as well as being a Ph,D. anthropologist, to see that a fossilized lower back vertebrae from an African site dated at 21 million years is almost identical to the corresponding vertebrae of a modern human.

Although there are fossil bones, and fossil footprints, showing that primitive higher primates throughout the ages have walked upright, and there are no fossils that suggest that any were quadrupeds, scientists who have been taught, and teach, that human ancestors invented bipedalism after they came down from the trees and split off from the chimpanzees do not seem able to get the message

In a special edition of Scientific American dated Winter 2013 and titled “What Makes Us Human” none of the 16 authors showed any awareness of Dr. Filler’s book, and several had things to say based on the old mistaken consensus.

But are not chimpanzees quadrupeds? They are plainly trying to be, but they can not really do it because they have the spines of upright animals. With their backs at an angle of about 45% they get around very well using the knuckles of their hands for front feet but they can not ever be normal quadrupeds because their spines do not have the proper attachments to keep them from buckling under load in a horizontal position.

And what Dr. Filler does not say, even though he has presented the facts that establish it, is that there is now no shred of evidence that recent human forbears ever lived in trees.

To quote something that Dr. Filler does say, most eloquently: “In questioning and rejecting scientific orthodoxy, no mass of credentials will convince a spurned scientist that he or she should give way and accept that they have spent a career believing, teaching, and publishing in error.”

Two thirds of Dr. Filler’s book presents an historical overview and then outlines a new look at the origin of species which will undoubtedly be controversial, but the material regarding the origin of human bipedalism contained in the last two chapters is simple to understand and rock-solidly based on physical evidence.

And an interesting sidelight to the proof that all higher primates have been bipeds:


Until perhaps as recently as 100,000 years ago there lived in China, as established by three fossil lower jaws and a thousand fossil teeth, a giant ape twice the size of a gorilla. Since as a higher primate it must have been upright it matches perfectly the huge, very heavy, manlike footprints which human ingenuity is unable to duplicate, and the immense hair-covered bipeds that thousands of people claim to have seen in Canada and the United States.

It follows that the many people who investigate Bigfoot/Sasquatch reports need to realize that their quarry isn’t likely to be some unknown creature sure to be a close human relative because it walks upright, but a proven animal that lived near the land bridge to North America and that already has a scientific name, Gigantopithecus-blacki.

Here is the link to the Filler book on Amazon:
http://www.amazon.com/Upright-Ape-New-Origin-Species/dp/1564149331
I asked Bill the following, and he sent the question to John:

BIGFOOT BOOKS: Can you provide the date of composition, and a good link to the subject/article or whatever John is responding to here? Has this been posted or published elsewhere?
I'm happy to post this, but I normally like better attribution and context, for citation.
Thanks, Steve

BILL MILLER: John wanted as many places that would mention this book to do so ... I posted it on West Coast Sasquatch after I emailed you. John sent me the letter a couple of days or so ago.

Here is John's reply:
JOHN GREEN: Steve,
Look up "The Upright Ape" on Amazon. The author, Aaron Filler, took a PhD in anthropology, during which he studied a vertebrae almost identical to its human counterpart that was found in an archaeological dig in material firmly dated at 21 million years. Later he studied medicine and became a spine surgeon, an unusual and perhaps unique combination of qualifications. He also researched the history of theories before Darwin's about how living things evolved. His book deals with that history and he presents a theory that all major changes resulted not from accumulated gradual adaptions but from extreme individual mutations. That is what most of the book is about, and it would be hard going for the average Sasquatch enthusiast.. However:

In the last two chapters he deals with what I have mentioned, that there is no fossil evidence that any higher primates were ever quadrupeds. All the fossil evidence shows that they all walked upright. There are no fossils leading to the chimpanzee, bonobo and gorilla, which walk half upright today, and their spines prove that they were originally bipedal.

Remember that not long ago humans were believed to have split off from the gorillas and chimpanzees some millions of years ago, but then immune reactions and DNA established that gorillas split off from the basic stock first, while chimpanzees and bonobos remain very closely related to humans, not to.gorillas. This cuts short the time that humans were supposed to have had to come down from the trees and evolve into bipeds. The evidence is plain that Homo Sapiens as well as the others arbitrarily called Homo or Australopithicus or Gigantopithecus etc. follow the basic upright pattern and it is the gorillas and the chimps that are evolving a new way of walking. Both are called knucklewalkers, but the adaptions that allow them to use their arms in walking are not the same, while the orangs, even though they are much more evolved to be tree dwellers, follow a very different pattern which includes considerable bipedalism and the gibbons, although always in the trees, are fully bipedal.

Someone many years ago came up with the theory that humans were quadrupeds that became upright through living in trees and then came down to earth, continued to walk upright and evolved feet adapted for walking on two legs. That theory became almost universally accepted a long time ago and is considered by most scientists dealing with such matters to be established fact. I expect Filler isn't the only skeptic, but he is the one with unique qualifications and the guts to challenge the prevailing belief in a book.

I happen to have an atlas of primate anatomy with detailed drawings of vertebrae of baboon, chimpanzee and human. It showed immediately that human and chimp vertebrae are almost the same while those of the baboon, a real quadruped, are basically different. Since humans and chimps are designed to support their weight with a stack of vertebrae that rest on top of each other they have no attachments on the main bone column for locking the spine together in a horizontal position. You don't need an atlas, you can look up illustrations on the Internet.

So Filler is presenting proof that most scientists are dead wrong about human evolution. If that isn't a big story I am not a journalist.

Yes, this is fascinating. To me, the knuckle-walking is adequate enough to show that the apes are not true quadrupeds, but are walking on hands with a somewhat awkward-seeming re-adaptation to quadrupedal locomotion. A full quadruped would, I think, not be doing something so seemingly awkward as walking on knuckles. This puts their hands in a rather vulnerable position, too, it seems to me. I'm no expert in skeletal anatomy, but I will look into the book you have mentioned.

It seems to me that huge new discoveries about human (and potentially Sasquatch) evolution are always right around the corners these days, and progress in understanding is expanding geometrically.

I'm wondering if I may also publish your follow-up letter here with the original essay Bill sent me? Also, any further words would of course be appreciated.

May I ask one further question?
[EDITED OUT. FURTHER CONVERSATION REQUESTED TO BE PRIVATE BY JOHN. THIS REGARDED SOME ESOTERIC BLUFF CREEK STUFF.]

I hope all is well with you.
Best regards, Steve

Note:
The original piece above was also published in the latest issue of the BIGFOOT TIMES newsletter.