NEWS FLASH: Bigfoot Media Barrage. My "From Out of Nowhere" Radio Appearance, plus BOBO on Rogan, SIERRA KILLS Interview and Site Location 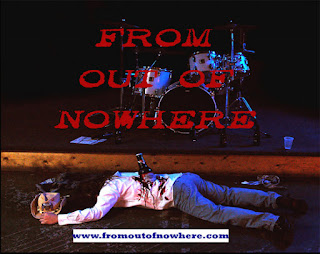 As of tomorrow I am officially "Out Squatching" for a good long while.

A few days ago I did an interview with some non-Bigfooter guys for their radio show. It's nice to talk to someone once in a while who is not a "Bigfooter." And yes, I will admit it now, this little "News Flash" has about six hours of time-consumption in audio and video (see below for more). Bigfooting can be a full-time job, I do regret. Have fun!

Below, also find a few other items of online media that came up recently. James BOBO Fay did a very revealing two-and-a-half-hour long appearance on the Joe Rogan Podcast. Also, Ro Sahebi of TeamTazer Bigfoot did a great hour-long "feature film" featuring an up-close-and-personal, beer drinking interview session with the Sierra Killer himself, Justin Smeja.
(I know, readers here perhaps thought I'd never get around to mentioning "Sierra Kills" on this blog. Yes, but that is because to me it is just a story at this point. Will it prove Bigfoot to be real? Only Wally and Melba know... I guess. Well, maybe. However, since all the good information says that Ketchum has confirmed the Sierra sample as "positive for Bigfoot," what will become of the Ketchum Bigfoot DNA study if the Smeja story proves to be a hoax? It will all fall to pieces, that is what.)

You might enjoy their show for reasons other than Bigfoot:
"From Out Of Nowhere features interviews with musicians, comedians and authors, a bi-weekly music show, plus parody and rants from hosts Eric Furniss and Rob Kern. It's our job to feature the loud and independent spirit of pop culture, be it rock, outlaw country, metal or blues. Some of the names you might not be familiar with but open your ears and crank it up, it's all about being turned on to something new here at FOON!"

*******
AND MORE:
Here is James BOBO Fay on the "Joe Rogan Experience" Podcast. The interview was really quite revealing if you want to know about things like the Ketchum DNA Project; and of course anything Bobo does is entertaining...

Here is another interview Bobo did recently, with Sharon Lee, the Bigfoot Field Reporter:
http://www.blogtalkradio.com/bigfootfieldreporter/2012/07/02/7112-interview-with-james-bobo-fay
******* 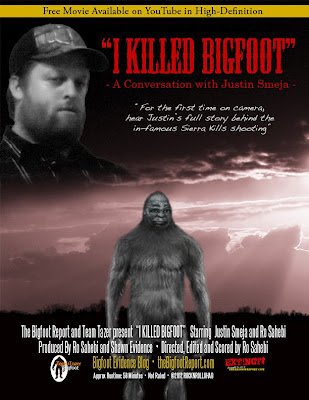 Here is the Ro Sahebi video production of his Justin Smeja interview. It's fascinating, even if you don't believe it, or if you believe Justin is an "evil" Bigfoot killer.

Some good links to coverage of this story may be found here:http://www.ghosttheory.com/2012/07/16/video-i-killed-bigfoot
Visit the sites of the guys behind this film thing, not the killing...
The Bigfoot Report: http://www.thebigfootreport.com/
Bigfoot Evidence Blog: http://bigfootevidence.blogspot.com/

Recently, blogger Robert Lindsay announced the approximate location of the "Sierra Kills" on his eponymous blog, with its fascinating "Bigfoot News" section. Read it here:
http://robertlindsay.wordpress.com/2012/07/18/bigfoot-news-july-18-2012/

Here are the locations using his coordinates on Google Maps... Click to Enlarge.
For those of you in need of recovery support from Bigfooting Addiction, there is help! Visit this new Facebook group for fellowship and a good, strong cup of coffee.... Click the link in the caption below to join us.

This blog is copyright and all that jazz, save for occasional small elements borrowed for "research" and information or satirical purposes only, 2003-2012, Bigfoot Books and Steven Streufert. Borrowings for non-commercial purposes will be tolerated without the revenge of Angry Bigfoot, if notification, credit, citation and a kindly web-link are given, preferably after contacting us and saying, Hello, like a normal person would before taking a cup of salt. No serious rip-offs of our material for vulgar commercial gain will be tolerated without major BF stomping action coming down on you, hu-man.

Posted by Steven Streufert at 6:49 PM