A Packet from John Green on Peter Byrne, Part One 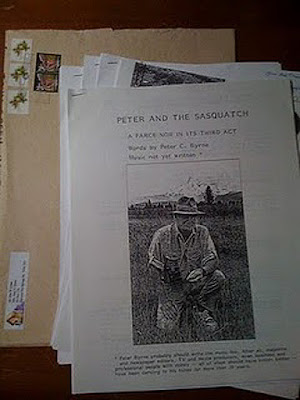 Back in early 2010 we received a very interesting packet in the postal mail from Canada from none other than the Moses of Bigfooting, JOHN GREEN. Included therein was the ultra-rare and unusual, "never-in-print" short work, PETER AND THE SASQUATCH: A FARCE NOW IN ITS THIRD ACT. Words by Peter Byrne. Very Interesting!!!

Here this blog will present the first document, with a total of 18 pages. As you can see in the image here, there were others included. We'll get to those in a second part.

Yes, this is an artifact of the old-school Bigfooting Wars, which really began in 1958, reaching a peak during the time of the Pacific Northwest Expedition in Bluff Creek, which started with Green, Titmus and Dahinden, with others, and was financed by Tom Slick. Green and Dahinden both bailed out early on, when conflicts arose. Eventually Peter Byrne was brought in to run the show.

This document is presented as it is, without judgement or assessment on the part of this blog. It is posted here as an historical artifact of importance to the history of the pursuit of Bigfoot. Unfortunately, the original photocopy we received from Green was somewhat faint. I've adjusted the contrast a bit to make them ore legible. Enjoy. Click images to enlarge and better read. A "right-click" with the mouse to open in another tab will make them really large.

Well, that's it for now.
Happy New Year to all.

Posted by Steven Streufert at 8:23 PM